This quick tutorial aims to show you the steps required to set up the pcDuino WiFi Dongle with everyone’s favorite fiberglass-flavored development board: the Raspberry Pi (model B or model A). 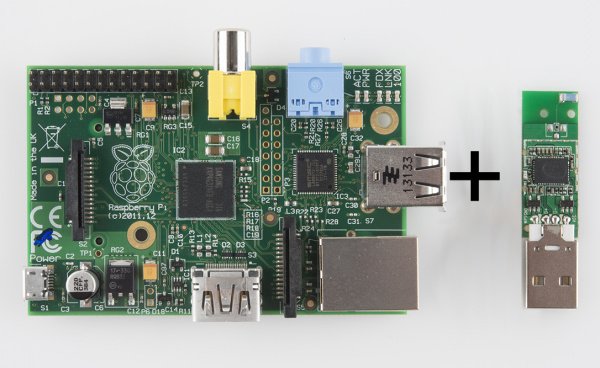 This WiFi dongle is a cheap solution to adding network connectivity to your Pi, if you don’t have Ethernet nearby. It’s easy to set up, once you get the hang of editting text files and typing Linux commands. It’s not quite plug-and-play-easy, but it’s easy enough.

There’s not a whole lot to this hardware setup:

The trick is finding a USB slot on the Pi. It’s only got two, and those are often swallowed up by a keyboard and mouse. If you’re out of available USB slots, you’ll need to find a powered USB hub to get more USB space. 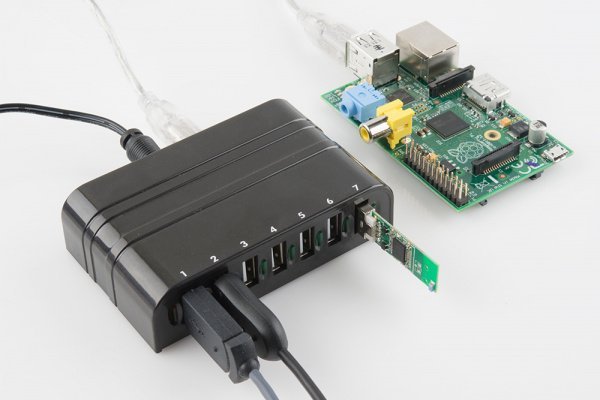 A powered USB hub serves the USB keyboard, mouse, and WiFi adapter. It also helps to offload a lot of the Pi’s powering duties.

Make sure the hub is powered. The WiFi adapter can pull a lot of current, which the Pi isn’t especially well-suited to sourcing.

Note: It’s possible to perform this setup with solely a USB keyboard, plugging that and the WiFi adapter into the Pi’s USB sockets. We generally recommend against this, as the WiFi adapter can pull a lot of current and potentially damage the Pi. Attempt at your own risk!

After connecting the adapter to your Pi, go ahead and power it up. Once the Pi has booted up, open up LXTerminal and issue this command:

This will list all USB devices attached to the Pi. Among other things, like your keyboard and mouse, you should see a listing for a Ralink Technology Corp. RT5370 Wireless Adapter. 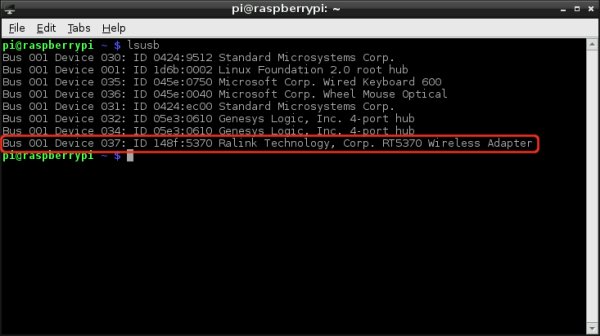 That’s the WiFi adapter, and it’s a good sign if you see that. It means the adapter has been recognized, and the RT2800 USB driver should have been installed for it.

There are two configuration files we need to edit to set up WiFi:

To edit both of these files we’ll use Nano, Raspbian’s default terminal text editor.

Open up LXTerminal to begin. Then, to open interfaces with the Nano editor, enter this command:

That command will open interfaces in Nano. By default it should look like this: 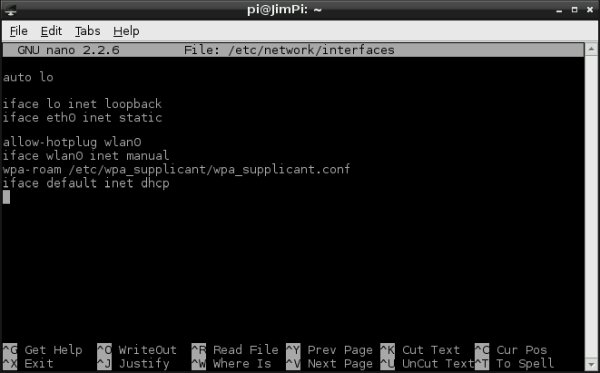 All done! Save interfaces by pressing CTRL+O, keep the file name the same when it asks. Then exit with CTRL+X. Your new interfaces files should look like this: 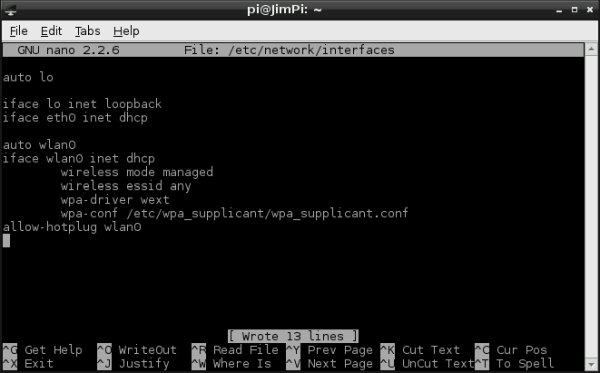 This is a fairly generic configuration that sets the Pi up to receive an IP address dynamically, through DHCP.

Make sure to modify the IP addresses to match the needs of your network.

Now that our network interface is configured, the next step is to specify the SSID and authentication parameters, which we’ll do in wpa_supplicant.conf.

wpa_supplicant.conf is a configuration file for wpa_supplicant, a piece of software used to implement WPA and other security protocols that WiFi networks implement.

Before continuing on, you should know what kind of security protocol (WPA, WPA2, WPA-PSK, WPA2-PSK, etc) your network requires. And, obviously, you’ll need to know the name (SSID) of your network as well.

Open wpa_supplicant.conf in Nano with this command:

Lot’s of typing! For lazy folk, don’t forget you can press Tab to ask the terminal to try to finish a directory location for you.

Leave those be, we’ll be adding some extra information below them.

Now it’s time to “choose your own adventure”. What, exactly, you fill this file out with depends on your network’s authentication protocols. Here are a few example configurations for the file:

Open Authentication With No Encryption

This is about as basic as it gets. If you’re trying to connect to an open network, all you need to know is the SSID:
network={
ssid=”yourNetworkSSID”
key_mgmt=NONE
}

If your network does require authentication with a passkey, you’ll need to enter two parameters:
network={
ssid=”yourNetworkSSID”
psk=”yourNetworkPassword”
}

Again, pretty bare bones. This should work for networks using WPA and WPA2-PSK, and should be agnostic to the cipher (TKIP, CCMP).

If your network does not broadcast its SSID, you’ll need to add scan_ssid=1 to the list. For example, here’s a configuration for a hidden open network with no authentication: 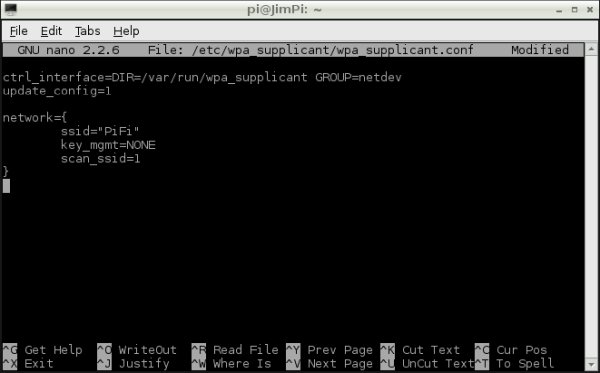 This will connect to a hidden network named PiFi with open authentication.

Linux-driven COM And Carrier Board Powered by Zynq SoC