The Pan/Tilt kit that we sell, developed by Dagu with the guys over at Let’s Make Robots, is a great way to mount mobile sensors on your robotic projects. In this tutorial we look at how you can control the Pan/Tilt kit with a Raspberry Pi and the Python programming language. 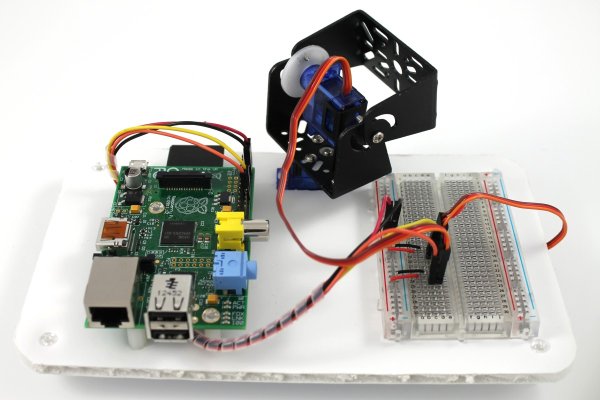 In order to control the servos of the pan/tilt kit with the Pi, we need to provide the servos with power, and connect their signal lines to GPIO pins on the Pi. Nearly all RC servos have the same wiring layout, although the colours may vary slightly. On the pan/tilt servos, the red (middle) wire is Vcc, the brown wire is Ground and the orange wire is the signal wire.

Connect the servos to the Pi as shown in the circuit diagram below. To begin with, we’d recommend that you get the servos working before you fully assemble the Pan/Tilt kit, as this way you can work out where the centre points of the servos are.

As the the servos in the Dagu pan/tilt kit don’t require much current, we can power them from the 5V line of the Pi. If you’d prefer to power them from another power supply, or if you’re using different servos that require more current, or a higher voltage, then you can modify the circuit, as shown in this image.

Unlike standard DC electric motors, which turn continuously at a given speed, servo motors contain control circuitry which is constantly trying to drive the servo motor to a set angle. Most servo motors are given their target angle by sending a Pulse Width Modulated (PWM) signal along their signal wire. A PWM signal consists of a pulse that repeats at a fixed frequency (usually close to 50Hz for a servo motor), the width of the pulse determines the angle that that we want the servo to move to.

Most servos will be centred with a pulse width of approximately 1500μs, and then turn left or right with smaller or bigger pulse widths. The minimum and maximum allowable pulse widths vary from servo to servo but are usually close to 800μs and 2200μs respectively. You should avoid trying to move a servo beyond its minimum and maximum limits, as this can damage the servo.

Controlling the Pan/Tilt Kit with Python

Once you’ve assembled the circuit, you can control the servos using this Python script. This script requires the RPIO Python library, which can be installed with the following steps

To use the script run 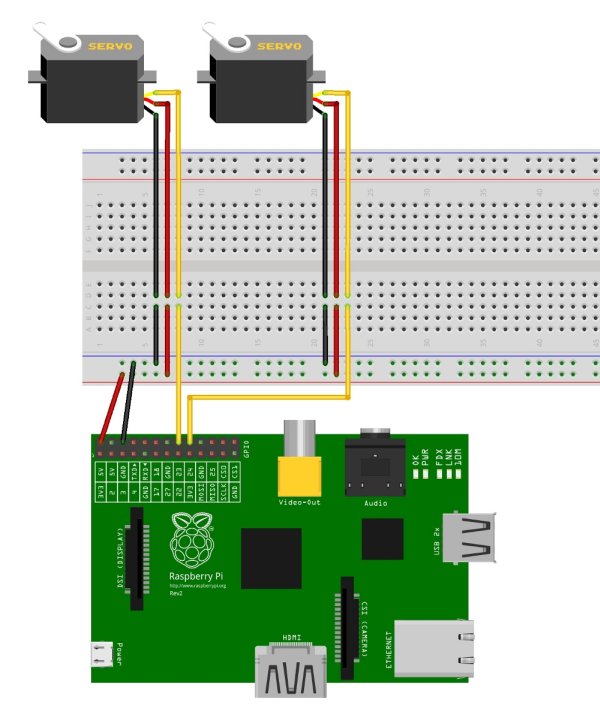 The script will then sit in a loop, waiting for one of 3 commands. A ‘p’ will move the pan servo, ‘t’ will move the tilt servo, and ‘e’ will run an exploration animation, scanning the pan/tilt head back and forth. You can specify either an angle in degrees, or a pulse width in μs for the ‘p’ and ‘t’ commands by putting a number straight after them (no space). The program treats any number less than 500 as an angle in degrees, and all other numbers and a pulse width. As an example

The script is a bit too long to explain in detail, but the important bit occurs on lines 144 to 151

For more detail: Using the Dagu Pan/Tilt Kit with the Raspberry Pi

How to build your own Raspberry Pi home alarm system

Thanks to RaspberryPi.org for flagging the work of Gadget Nut, who is definitely a Gadet Master, too. They have been...