As the power requirements of CPUs and GPUs in modern gaming machines continue to rise, they are quickly becoming more and more of a space heater that happens to play games. If you’re using your PC in a tight space with a door shut, you might find the temperature in your office rising relatively rapidly. Some solutions to this include fans, window AC units, or moving the computer somewhere else and routing cables back to the office. The fine folks at [Linus Tech Tips] tried something a little out of the box by putting the whole computer in a box. 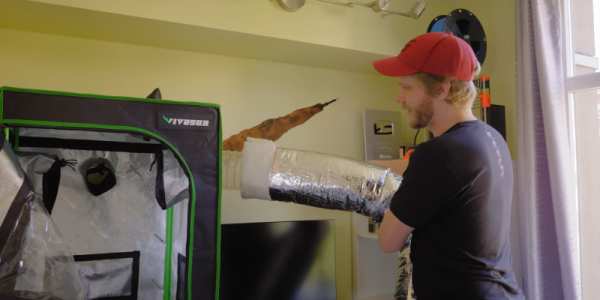 We don’t usually cover [Linus Tech Tips] here at Hackaday, but we thought the approach was somewhat novel. PC cases have many exhaust fans and holes, so it’s hard to extract the hot air from a single point. So after purchasing a comically large but cheapish “plant” growing tent, they could enclose the PC and remove the heat through some insulated ducting. A laser-cut adapter plate and 3d printed hose connector allowed the hose to sit in the window to vent outside. An inline fan pulls all the needed air from the tent to the outside. Ultimately, the temperature in the room stayed chill while some benchmarks were running, but there was speculation that the fan was pulling in air from the rest of the apartment to vent the PC’s heat. We’d love to see a more closed system with a heat exchanger to the outside.

Perhaps they can borrow [Diy Perks]’s bellow PC build and connect the hose right to it, getting rid of the tent. Video after the break.

Source: VENTING YOUR PC OUTSIDE

CAN PERIPHERAL FOR RP2040, COURTESY OF PIO