Broadcasting systems has come a long way since radio stations started airing news and music. Both the technology and the services offered to people have changed a lot over the years. What have not changed are people listening to radio broadcasts. Not everyone has a transistor radio because they no longer need one to listen to radio broadcast. They can use their PC or other computers with internet connectivity to listen to broadcasts or rather streams from internet radio stations.Here is the new Raspberry pi internet radio!!! 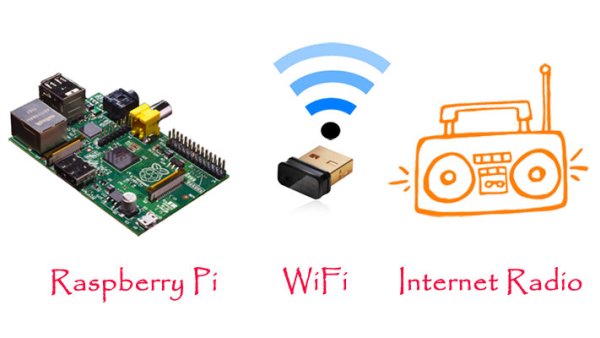 Internet radio is a tool for broad casting audio services over the internet. The broadcast called as web cast is much like the traditional radio broad casts but transmitted over the internet. All the services offered over conventional radio broad casting are being web casted too. Web casting is different from file sharing because the audio is not downloaded but streamed. In this project we are talking about Raspberry pi internet radio.

Wi-Fi is a Wireless Local Area Network (WLAN) based on the IEEE 802.11 standard that allows devices to connect to a broadband network wirelessly. The network consists of one or more access points also called as hotspots. Multiple access points help in extending the coverage of Wi-Fi. They provide internet access to computers equipped with wireless network interface controller called stations.

Raspberry Pi is a very small single board computer. Equipped with standard input and output devices it can be made to function like a desktop computer. It can also be made to interact with the environment when electronic sensors are interfaced with the Raspberry Pi. This has made Raspberry Pi extremely popular among hobbyists and hackers.

Steps to set up the Wi-Fi Raspberry pi internet radio:

The next thing to do is to expand the rootfs filesystem so that the root partition does not run out of space. This is different from regular partitioning because we are dealing with a partition that will not be unmounted.

Once the rootfs filesystem is expanded, login to the Raspberry Pi as root from your laptop. A tool that will come handy this time is WinSCP or Windows Secure Copy that lets secure file transfer to a remote computer. We need to create a folder inside the /home/pi folder where we can put some software. Let us name the folder radio. Gnu\Linux users can do the same by first logging in as regular user over ssh and then switching to root account using the sudo command.

At this point Windows users may make use of another software for logging into the Raspberry Pi from their laptop called PUTTY. Gnu\Linux users shall continue using their terminal. In order to download the software to the newly created folder we have to first change the directory and enter the folder. One can use a download manager like wget to download the software. The downloaded file is a tarball which needs to be decompressed.