Update: Now there is a NuGet package to download for Visual Studio 2015:

This project was about to make the Raspberry Pi “Sense HAT” working on the Windows IoT platform. 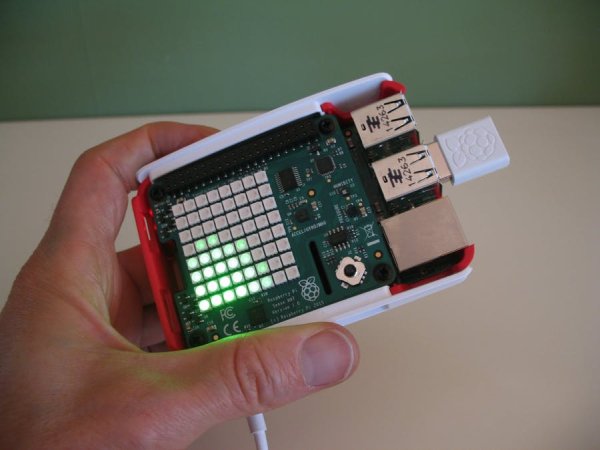 I had some initial help from Graham Chow (see his project here) who’ve done a great job to get the LEDs and joystick up and running.

Then I contacted Richard Barnett who is the father of the RTIMULib used by the official Sense HAT installation. This library was written in C++ and managed the sensor readings. Richard “got onboard” and did the raw porting of his library (so far the senors used by the Sense HAT) into C#.

I did some refactoring of the library and have included the display and keyboard drivers into a complete C# project solution which you will find here (including the full source code).

The solution contains a demo project that shows some of what you can do with the Sense HAT.

(It’s really difficult to take pictures or film the Sense HAT due to the relatively slow update of the LED displays. I had to use a really old camera with lousy frame rate to get an acceptable picture; otherwise the display would be blinking and flickering. Our eyes are luckily “bad enough” to find the LED update frequency acceptable.)

The simple current-limiting load switch shown in Figure 1 will be familiar to most readers. In this circuit, a high...