This project is submitted to Mr. Paul O’Brien’s Internet of Things Class (EMNG2024).

The project is a wireless doorbell that when pressed, it sends the user an SMS alert and emails them an image taken by the camera pi. It uses raspberry pi 3 and node red. 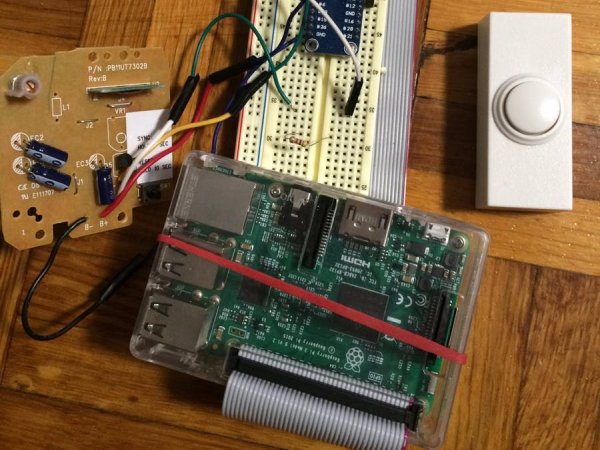 Connect a Raspberry Pi camera to the Camera connector:

Open up the chime of the wireless doorbell and cut the speaker wires half length and connect to the GPIO 22 (Pin 15). Connect the battery pins of the doorbell circuit to the 3.3 V and ground.

During the process, we encountered a lot of problems and challenges. We were supposed to add an audio playback and audio record but could not get it to work. Also, the sql database is not properly configured. We could not get these elements to work because we lack knowledge on these areas and the nodes are not functioning properly. We have tried all available nodes and spent two weeks on them but we still couldn’t get it to work.

We got all the nodes to work through trial and error and the doorbell to work by testing.

At first, we were planning on using Cayenne instead of node red but our Raspberry Pi always freezes when we access the Cayenne website so we decided to go with node red.

Node red is really good due to its flexibility and free form but it lacks a lot of components and tutorials.

Thermal design: Get the heat out of the electronics

If you have high-powered LEDS, or a power supply, or are trying to control larger motors, you have to get...