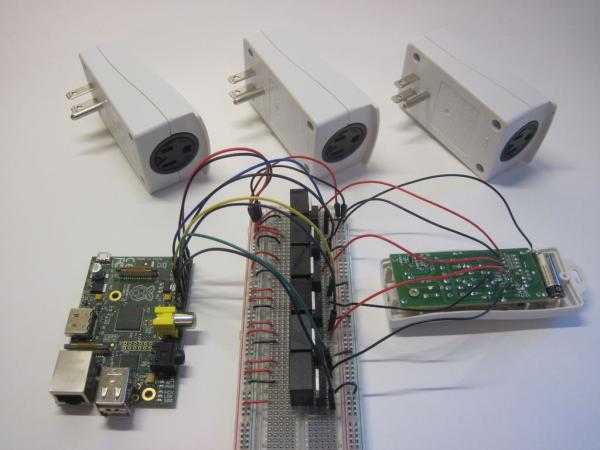 *My Quickcam Pro is 5 years old and I’m not sure if this exact model has been discontinued, or if it is the same thing as the “Webcam Pro 9000”, which pops up on Amazon. You may need to do some poking around online to find out if your webcam is compatible with the Raspberry Pi (keep in mind that you only need the mic, and don’t care about video). This wiki has an extensive list of verified peripherals.

Note: I opted for economy shipping from SparkFun for my multi-colored jumper wire. The good news is I got free shipping. The bad news is I only had red and black jumper wire available before that. The connections in this project are a little easier to keep track of if you have 8 different colors available. So, for the circuit diagrams (expertly drawn in Powerpoint), I’ll use the following convention:

Anyway – now you need to solder jumper wires to the six pins identified in the previous step, plus the negative terminal of the battery connection (this will make sure your whole circuit has a common ground later). Seven connections total, as shown in the pictures above (a “fake” photo with the color-coded wires drawn in, as well as a photo of the real thing). 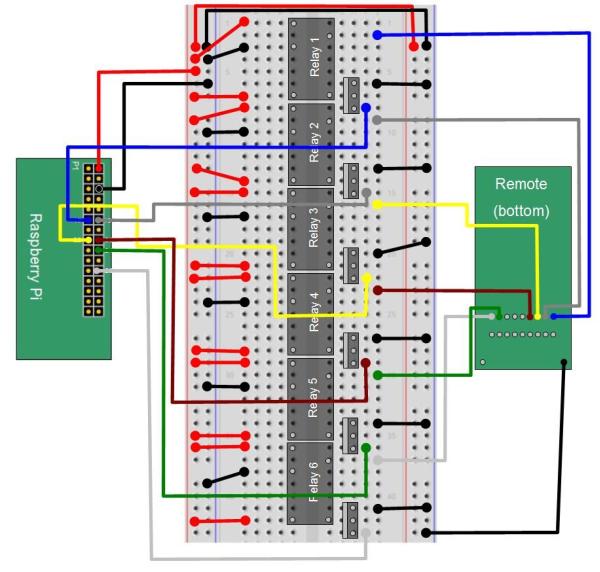 1. Insert the relays and MOSFETS (six of each). Important – I didn’t realize until after I made all of these diagrams that the packaging on the relays is slightly too bulky for them to occupy adjacent breadboard rows, as pictured here. You will actually need one blank row in between each relay, adding five rows of total space to the build (which shouldn’t be an issue if you’re already using a big 60+ row breadboard).
2. Use jumper wires to make all the +5V (red) and ground (black) connections on the breadboard.
3. Connect the breadboard to the Raspberry Pi’s +5V and GND pins, and to the negative battery terminal (-) on the remote. Important: do NOT connect the positive power rail on the breadboard to the (+) battery terminal on the remote. The remote battery is 12 volts, so if you short that to your Raspberry Pi’s 5V pin, bad things will happen.
4. Connect the Raspberry Pi’s GPIO pins (17, 18, 22, 23, 24, and 25) to the gates (left-most pin when facing the side with the writing) of the respective MOSFETs as shown. See the color-coded table above, which matches the wire colors I used in the breadboard diagrams, for help keeping track of everything. See this page for more information about the GPIO pins and the numbering scheme (which can be confusing if you’re new to Raspberry Pi, especially if you’re used to Arduino).
5. Connect the wires you previously soldered onto the remote to the breadboard. I use the same color-coding convention for these wires in the diagrams above.
For an explanation of how the circuit works, see this step of my previous Instructable.