The Withings Body Cardio is the latest in the brand’s range of smart health-centered devices, and the second Withings product we’ve tackled in this series! 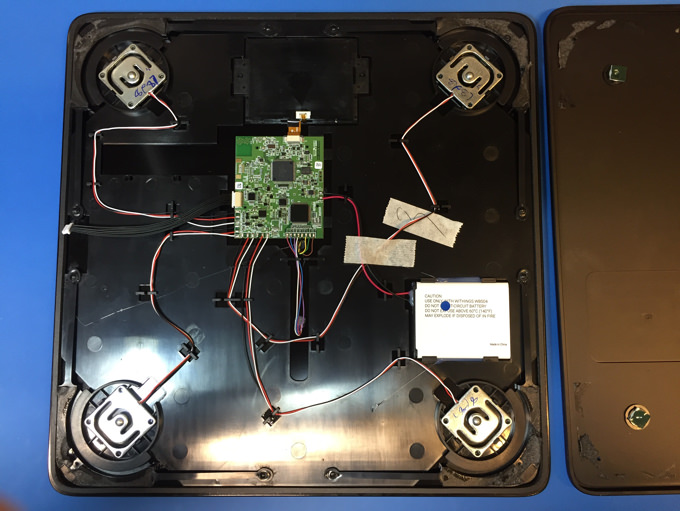 It’s a smart scale with a pretty impressive set of metrics. It detects weight; fat, muscle and bone mass; hydration level; heart rate; PWV (Pulse Wave Velocity); and it shows your daily step count (if you use the app) and today’s weather.

Of course, this data collection was exactly what we were interested in: how does the scale measure these different factors?

We gathered our tools and found out…

Opening up the scale was not an easy task – there was a lot of double-sided tape involved. There was also a pretty serious risk of breaking the scale while trying… So you can be extra glad we already did the hard work for you 😉

The back of the scale is fastened with four Torx screws – easy enough. The entire backplate, however, is glued to the front with double-sided adhesive cushions. Removing it simply involved pulling it firmly enough to break the adhesive, but not so hard as to break the connectors.

With the backplate removed, you can immediately spot 4 loads cells, one in each corner. According to a patent they issued last year they arrange the load cells in such way that only two Wheatstone bridges are used. This arrangement provides two outputs being amplified by two separate amplifiers which are fed to the controller unit. Also, having two outputs gives the scale the possibility to compare the two (left and right) and detect when the user stands off-center on the scale which is indicated on the display.

Having four 3-wire load cells and some kind of Wheatstone bridge configuration is one of the most common ways to design a weighing scale: open up your regular kitchen scale and you’ll probably find the same setup.

Apart from the four 3-wire load cells in the corners, you can see the main components: the main PCB in the middle, a rechargeable LiPo battery on the right, and the display on the top.

Let’s head over to the most interesting part: the PCB!

As you can see in the image below, the main board of the scale contains a couple of large components.

I also noticed that the right side of the PCB is covered with a protective coating. I can only assume that this is done to protect the PCB from environmental “attacks”, because this is the side of the PCB where the measurements happen. A coating like this probably serves to ensure greater accuracy.

The largest chip – the heart of the weighing scale – is the MK22FN1M0VLL12 from NXP. It’s a 120 MHz ARM® Cortex®-M4-based microcontroller, which should give more than sufficient processing power for a weighing scale.

We call our project RUFS, for Robotic Urban Farm System A vertical hydroponic garden Allowing for high density yields and...