In the pursuit of ever-shrinking circuitry for nanotechnology electronics, increasingly smaller devices and components are being developed. Now researchers at the University of Konstanz and the Helmholtz-Zentrum Dresden-Rossendorf (HZDR) in Germany claim to have micro-miniaturized the humble electrical switch all the way down to molecule size and proven its operation for the very first time. Unable to flick such a tiny switch mechanically, however, the researchers instead used light to turn it on. 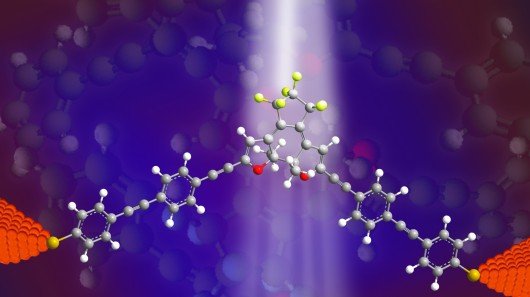 The new three nanometer-wide device is created from a diarylethene compound – a photochromic molecule that reacts chemically when exposed to light. Ring-shaped, a part of the diarylethene molecule ring is open when shielded from light, and then reconnects to the other half on exposure to light. With exceptionally tiny gold nanowires embedded into its structure, this connection then allows an electrical current to flow.

A physicist at the HZDR, Dr Artur Erbe, believes that new components created at a molecular scale will provide opportunities for much smaller and more efficient electronic devices.

“Single molecules are currently the smallest imaginable components capable of being integrated into a processor,” says Dr Erbe.

The researchers claim that the breakthrough capability of being able to switch a molecule on to conduct electrical current has never been fully proven before. This, they say, is because it requires a molecule that ordinarily possesses a strong bond between individual atoms, but is able to dissolve that connection and reform it as required when external energy is applied. Suspended in a fluid in a test tube for the experiments, the molecules were exposed to a beam of UV light to switch them from their open to closed states.

UDOO Neo embodies a new concept: a single board computer suitable for the Post-PC era: Like a Raspberry Pi, you can program...