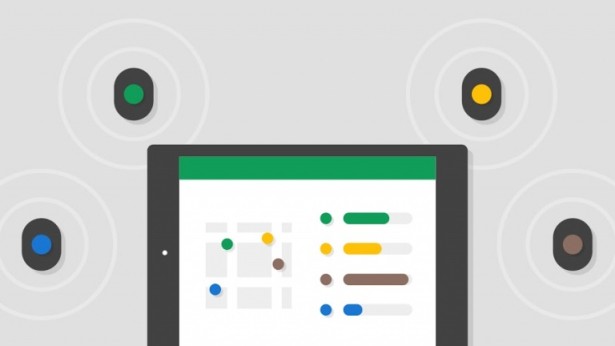 Mobile apps can listen to the signals being broadcast and trigger an action after analyzing beacon’s information.

Beacons are used for proximity-aware applications like positioning and navigation indoors like anti-lost tracking tags, another application is for location based advertisements.

There is no official Bluetooth Special Interest Group (SIG) beacon standard, so beacons have pseudo-standards. For example, iBeacon standard is used by Apple and Eddystone is used for Google.

As you can see in the above image, there is one byte (power) value indicating the iBeacon’s calibrated output power in dBm measured at a distance of 1 meter.
So Beacons can be used to calculate the proximity distance between the beacon and the receiver of beacon’s information. This calculation relies on a comparison of a Received Signal Strength Indicator (RSSI) to a beacon’s transmit (Tx) power to approximate the distance to the beacon.
The calculated distance can’t be very accurate, since RF signals fade unpredictably according to real-world environmental factors like walls. Future versions of BLE will solve this by using Angle-of-Arrival (AoA) and Angle-of-Departure (AoD) which allow a multi-antenna Bluetooth device to accurately determine the spatial location of another Bluetooth device.

For more detail: Everything You Need To Know About Bluetooth beacons in A White Paper