Nelectra is crowdfunding a supercapacitor based micro-UPS for Raspberry models B and B+, enabling brownout protection and “last gasp” shutdown sequences.

Bratislava, Slovakia based Nelectra’s first product was a generic “Juice4Halt” supercapacitor based micro-UPS (uninterrupted power supply) module aimed at single board computers used in industrial and embedded applications. The adapters protect the SBC’s operation from power brownouts and failures, and support so-called “last gasp” applications in which the SBC performs a fairly lengthy shutdown procedure. Today, the company launched an Indiegogo campaign to raise funds for manufacturing of a pair of Juice4Halt models that stack directly onto the 2×13-pin GPIO headers of Raspberry Pi SBC models B and B+. 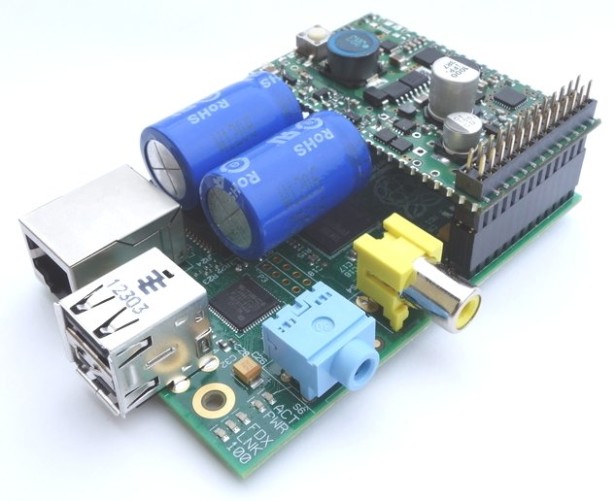 The Juice4Halt board integrates an Atmel ATmega328P microcontroller running open source Arduino code. A bidirectional step-up/step-down converter mediates between the stable 5C supply rail and the supercapacitors. During charging, the step-down mode transports power from the external supply to the supercapacitor. In case of power failure, the Raspberry Pi SBC is powered by the converter working in step-up mode. The second, front-end step-down converter converts input voltage down to 5.1V for the 5VC rail.

Thanks in large part to the use of supercapacitors instead of batteries, the Juice4Halt module is claimed to offer the following features and benefits:

The supercapacitors used by the Juice4Halt UPS fall somewhere between standard capacitors and batteries. They offer more energy density than other capacitors, storing more energy per unit volume or mass, but have less than half the power density (energy per unit time). Compared to batteries, supercapacitors have only about 10 percent of the energy density, but have 10 to 100 times more power density. They’re often used in vehicle power systems, such as recovering energy from braking, storing energy short-term, and providing burst-mode power delivery. 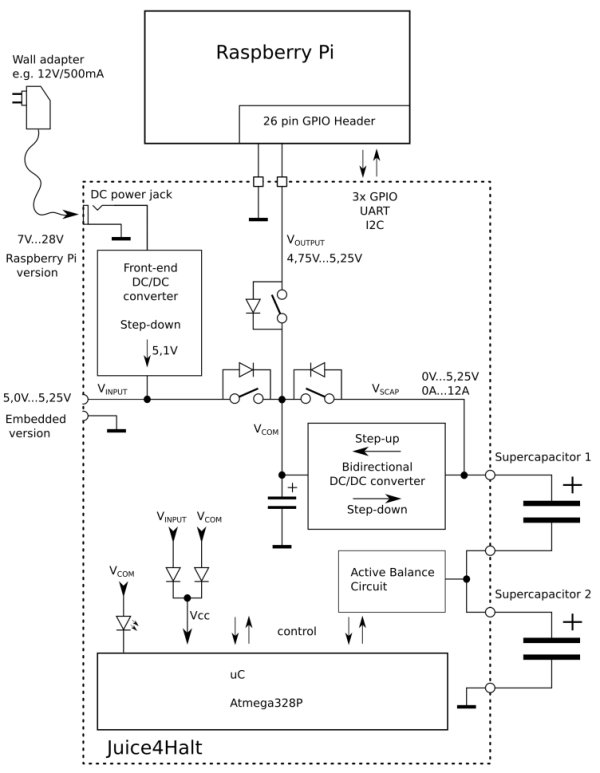