Electronics Weekly visits the Welsh factory where Farnell/Element 14 gets its Raspberry Pi boards made.

Run by Sony near Bridgend in Mid-Glamorgan, four of the plant’s eight pick-and-place/reflow lines are making Raspberry Pis 24 hours a day, five days a week. 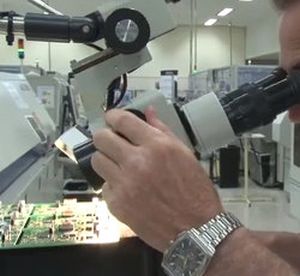 This used to be Sony’s UK TV plant, and Raspberry Pi is the first time it has run such high volumes – currently 11,000 Raspberry Pis are made there each day.

No stranger to fine-pitch pick and place – the plant has been making broadcast and professional cameras since demand for CRT TVs collapsed – Sony positions and solders components down to 0402 (1.0×0.5mm) on Raspberry Pi PCBs.

That said, the little computer gave Sony its first opportunity to handle package-on-package assembly – Raspberry Pi’s main RAM is stacked onto the CPU during production. Both chips are the same size and, as well as pads on the bottom, the CPU has pads on top to accept the RAM.

Automatic visual inspection is used extensively. For example: following screening (not shown in the video) solder paste is examined by both 2D and 3D camera systems before the boards move on to pick-and-place.

With all the inspection, Sony UK business development manager Gareth Jones tells us he gets “single figure ppm reject levels”. There is also 100% electrical testing plus further testing on samples.

According to Jones, UK manufacture is not always the answer, but small UK organisations like the Raspberry Pi Foundation can struggle to keep control of production if it is on another continent – avoiding ad-hoc component substitution, for example – and on-shore production can reduce cash-flow requirement.

For more detail: Video: How they make Raspberry Pi in the UK

Driving the Max7219 with the Raspberry Pi

The max7219 lets us control lots and lots of LEDs using just a few Raspberry Pi pin-outs. No hassles with...