The project is to build a facial recognition for Car Security System using the raspberry pi. This project offers additional advanced security features for new generation vehicles such as tesla. The raspberry pi will act as a command module for the proposed advanced system. The advanced security system only allows authorized personnel to use the vehicle. 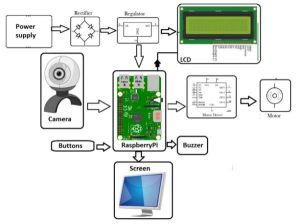 1.) To create an advanced system that will identify the authorized user of the vehicle using facial recognition.

Digital Image processing is a method used to convert an image into a digital format to perform some operations on an image. Some of these operations are used to enhance, highlight, analyze, optimize image characteristics such as sharpness and contrast, and extract various useful information from an image. It is a type of signal process in which the actual image acts as the input and the output can be an image or characteristics associated with that image. Concerning industry, digital image processing is among the growing technologies for its application in various kinds of fields. It is widely used in the medical field such as analyzing medical images to find out the cause of disease and some other researches. It also used in application software for editing such as Microsoft Paint, Adobe Photoshop, Picasa and Prisma. One of the multinational technology companies uses digital image processing applications for the main security features of their devices. In terms of safety measures, the proposed advanced system offers an improved
security system for partially computer-based vehicles.

Raspberry pi 3 – is a single-board computer that contains a System on chip usually called SOC (has a multicore processor, graphical user interface, read-only memory, and input/output peripherals inside it). It is a small device capable of doing most of the things that a desktop computer can do.

· Integrated Circuit (IC) – it is a set of electronic circuits on one small flat piece of semiconductor material that is normally silicon.

· Integrated Circuit socket – it is used as a placeholder for IC chips.

· Buzzer – is an audio signaling device, which may be mechanical, electromechanical, or piezoelectric. Typical uses of buzzers include alarm devices, timers, and confirmation of user input.

· Liquid Crystal Display – is a type of flat panel display which uses liquid crystals in its primary form of operation.

· Resistors – is a passive two-terminal electrical component that implements electrical resistance as a circuit component.

· Capacitors – it is a component that used to store an electrical charge, consisting of one or more pairs of conductors separated by an insulator.

· Transistor – it is a semiconductor device with three connections, capable of amplification in addition to rectification.

· Diodes – it acts as a switch which allows the flow of current in one direction only.

· Printed Circuit Board (PCB) – mechanically supports and electrically connects electronic components using conductive tracks, pads and other features etched from one or more layers of copper laminated between sheet layers of a non-conductive substrate.

· Light-emitting diodes – is a semiconductor device that emits infrared or visible light when charged with an electric current.
· Transformer/Adapter – is a passive electrical device that transfers electrical energy between two or more circuits.
· USB to Serial converter – cables that convert the data sent by a serial-enable device for use by a USB port.
· Switch – To turn on/off the system
· Camera – an input device used to capture either still pictures or motion video of the user.

· Python software – software use to input codes to the system.
· Windows OS

1.) Connect the components as shown in the block diagram.
2.) Download and install the Python software on the computer.
3.) Open the python software and copy the codes from the file.
4.) After running the program, register the image of the user as authorized personnel.
5.) After successfully registering the image of the user, turn on the switch and let the system scan
the user’s face.
6.) After successfully authenticating the user, the motor will automatically start.

SMART WIRELESS LAUNCHES A NEW SOM BASED ON SNAPDRAGON™ 660