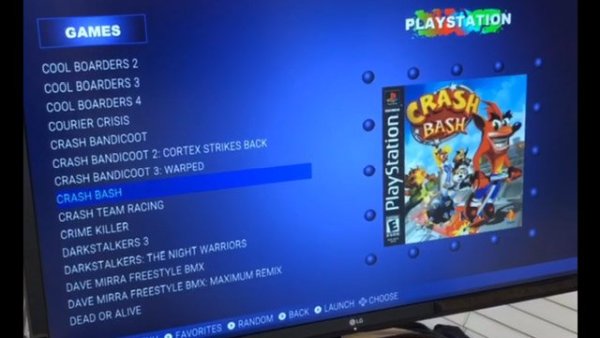 Reddit user Retrocution posted a video of his Raspberry Pi 3 B+-powered PlayStation Classic in r/PlayStation earlier today. The homebrew system gutted Sony’s official mini console and replaced it with the popular system-on-a-chip (SoC) running a branch of Retropie. Retrocution’s Raspberry Pi PlayStation uses a number of modifications to the Retropie software, including custom boot screens and a custom UI. Combined with the official PS Classic case, the homebrew system provides a welcome alternative to fans who felt burned by their PS Classics.

Retrocution shows the Pi-powered mini console running Crash Bandicoot, and scrolls through a number of games on the system. Crash Bandicoot was not included in the official PS Classic, even though the title was one of the best selling games for the console. The redditor also shows the reset and “disc open” buttons operating menus on the homebrew system. He said he has plans to post setup instructions on his YouTube channel in the coming days.

Last week saw modders hacking the PS Classic to inject new games into the official software. Lax security and poor cryptography means that these kinds of runtime hacks are relatively easy to perform. At least, compared to Nintendo’s classic consoles. The PlayStation Classic launched with 20 games available, but reports have shown that over 30 other games have files on the device. The PS Classic was also found to run a number of games at 50Hz, which affects gameplay speed and can cause display issues.

Sony announced the PS Classic in September, but only revealed five games at the time: Final Fantasy 7, Wild Arms, Tekken 3, Jumping Flash, and Ridge Racer Type 4. The majority of the other 15 titles haven’t aged particularly well, or are using the inferior 50Hz PAL versions of games. The $100 mini console has been thoroughly torn apart by PlayStation fans for what many have deemed a lack of attention.

Fans have taken matters into their own hands in response to the poorly conceived PS Classic. We’ll likely continue to see hacks, mods, and other homebrew systems crop up as fans try to salvage their hopes for a worthy PlayStation Classic.

A team of researchers from National Renewable Energy Laboratory (NREL) has discovered a new method for developing a rechargeable non-aqueous...