The Raspberry Pi is an excellent option for sprucing up your home life, but what if you wanted to take it on the go? That’s where projects like this one from Davide Marchetti with Bag Builds(opens in new tab) comes into play. He’s taken the Raspberry Pi and a few extra accessories and packed them into a mobile platform inside a backpack. 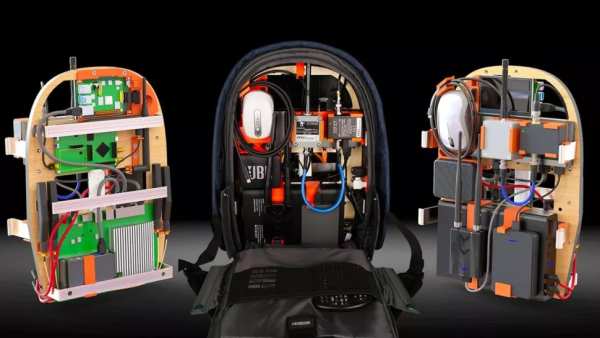 With his Pi-powered backpack system, Marchetti is ready for all sorts of “outdoor hacktivities” as he puts it. It includes a bunch of fun tools ranging from a sound system to a HackRF antenna, so he’s ready for anything fun and serious that might come his way while out and about. But, of course, a degree of flexibility comes with all-in-one rigs like this—which is part of its appeal—so pinning its purpose on one goal is challenging.

This bag build is just that, a build. Marchetti didn’t toss all the components in a sack, zip it up and call the job done. Instead, this rig involves a custom-made frame designed to mount all components inside carefully, protecting them while moving and easy to access as needed.

Marchetti was kind enough to share a complete parts list of everything he put inside for anyone interested in constructing their own or something similar. It’s powered by a Raspberry Pi 4, but you could easily swap it out for a Raspberry Pi 3 B+ if that’s what you have on hand, but a 4 B will have more power to back it up.

In addition to the Pi, it also features two external storage devices, including one HDD and one SSD. It has one Linksys WRT1900ACS router, a Wi-Fi adapter, a GL.iNet OpenWrt router, and a HackRF device using an antenna with support from 1 MHz to 3 GHz. It also features a docking station with Thunderbolt 4 and a Thunderbolt NVMe. To keep things mobile, it relies on a 250Wh battery.

If you want to recreate this Raspberry Pi project, check out the Bag Builds Instagram(opens in new tab) for an up-close look at the project and everything used in its construction. Then, follow Marchetti for more creations and updates on this Pi-powered backpack(opens in new tab) project.

Source: Raspberry Pi Backpack Is Ready for Hacking on the Go