The original Ghostbusters movie is a classic that’s still delivering nearly 40 years after its release — just let that sink in for a minute. Almost every aspect of the film, from hand props to quotes, is instantly recognizable, even to people who haven’t based their lives on the teachings of [Venkman], [Stantz], and [Spengler]. To wit, we present this PKE meter-style WiFi scanner. 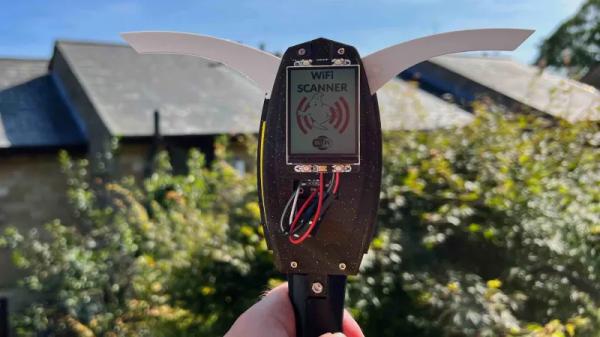 Of course, [Kevin McAleer]’s project is strictly in the “Just for Fun” category. But that doesn’t mean it’s not at least somewhat useful. The design is pretty close to the original PKE meter, with a little bit of creative license taken to make it easier to build. Guts include a Raspberry Pi Pico W and a generous 320×240 LCD display. The body of the meter is entirely 3D printed; design files are of course available. The meter’s arms are geared together to move with a single hobby servo.

On the software side, [Kevin]’s GUI lets users see a list of WiFi hotspots in the area and select one from the list. From there, the position of the arms is determined by the RSSI for the hotspot, similar to how the prop was supposed to indicate the proximity to a spook, specter, or ghost. There’s perhaps a bit of a missed opportunity by not adding LEDs to the arms, but we’ll let that slide.

The video below has full design and build details, but fair warning that it’s a bit on the long side. That’s probably just a reflection of how much work [Kevin] put into this, though. Of course, you may rather build a PKE meter that “actually” detects ghosts, in which case we’ve got you covered.