Three open-spec SBCs have been launched on Indiegogo. They are the RK3399-based Khadas Edge SBC, a new Edge-1S model that uses the AI-enhanced RK3399Pro SoC and an Edge-V model that replaces the Edge’s MXM3 connector with 40-pin GPIO and adds MIPI-DSI and -CSI. Shenzhen Wesion’s Khadas project exhibited the Khadas Edge SBC in July, which runs Linux or Android on Rockchip’s hexa-core RK3399 SoC. Now Khadas is in business with Indiegogo with a $50K flexible funding campaign for the Khadas Edge and two new models. The Edge-V version has a similar footprint to the Amlogic based Khadas Vim and Khadas Vim2. There’s also an Edge-1S model that runs on Rockchip’s new neural chip enhanced RK3399Pro SoC. 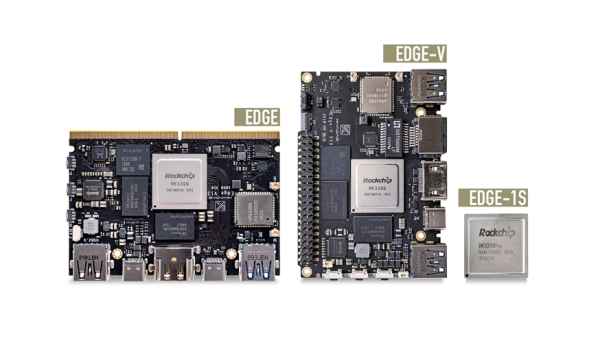 The Khadas Edge-V is built for general purpose hacking and home theater applications. The Edge and Edge-1S are designed for professional embedded development and deployment, like applications for computer clusters, drones, and augmented reality gear. Initial packages for the Khadas Edge and Khadas Edge-V are of similar price and includes a free accessory bundle. The Edge initial package gives you a free Edge IO debugging daughter-card and Edge heatsink while the Edge-V package offers a free Khadas Vim-style heatsink.

Other extra-cost accessories include a $9 bundle that gives you a heatsink and an Edge IO daughter-board, which enables serial debug and easier GPIO expansion. Other accessories include a fan with USB-C adapter ($14), a camera with LiPo battery ($19), and the Khadas Captain carrier board option, which is designed primarily for gaming console configurations. The Captain Carrier costs $39 with a free, 5-inch, HD multitouch screen, and seems to work only with the MXM3-equipped Edge and Edge-1S models, not the Edge-V. The Edge Basic and Edge-V Basic are available for $99 with 2GB LPDDR4 and 16GB eMMC 5.1. There’s also a Pro (4GB/32GB) model for $149 and a Max version (4GB/128GB) for $199. Once the initial packages. are exhausted, the price remains the same, but without the free accessories.

Developers, makers, Raspberry Pi enthusiasts or anyone else wishing to monitor the air quality in a location either indoor to...