UrsaLeo Pi kit, which combines a Raspberry Pi 3 and a 2.4GHz radio equipped Silicon Labs Thunderboard 2 sensor board that connects to Google Cloud, has been launched by RS Components. UrsaLeo’s kit, which was recently initiated by Mouser, was originally called “UrsaLeo UL-RPI1S2R2” and is designed to send sensor input to Google Cloud for storage and analytics. The kit is designed for Industry 4.0, automotive diagnostics, healthcare, and general data monitoring. 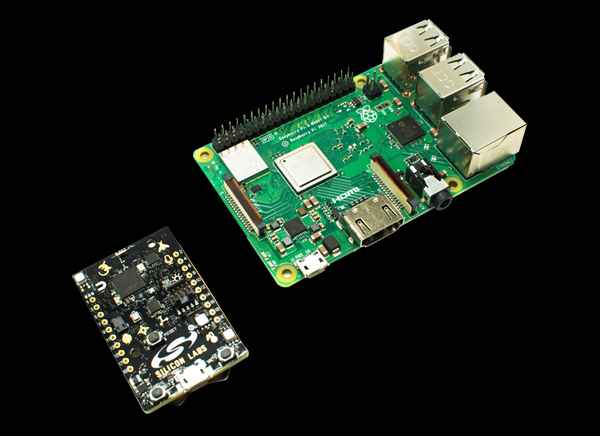 The UrsaLeo Pi has the same Silicon Labs Thunderboard Sense 2 sensor board, which is present in the earlier UrsaLeo UrsaCloud UltraLite, also named the UrsaLeo UltraLite or UL-NXP1S2R2. While the UltraLite kit incorporates the Thunderboard 2 with NXP’s official development board for its Cortex-A7 based iMX6 UltraLite (UL) SoC, the UrsaLeo Pi makes use of a more powerful Raspberry Pi 3 SBC.

The UltraLite version has a better debugging functionality than the Pi, and also has reduced “restrictions on hardware re-use,” says RS Components. Nevertheless, the Pi version is faster and much cheaper. The Pi costs 154 Pounds ($197) without VAT at RS Components in comparison to 455 Pounds ($582) for the UltraLite. Mouser’s prices are $195 and $550, respectively. The Thunderboard Sensor 2 (or Thunderboard 2) board is equipped with temperature, humidity, UV, ambient light, barometric pressure, indoor air quality, and gas sensors.

Available also, is a 6-axis inertial sensor, a digital microphone, and a Hall sensor. The board is fitted with Silicon Labs’ EFR32 Mighty Gecko multi-protocol radio, which enables 2.4GHz wireless technologies such as Bluetooth Low Energy (BLE), Thread, ZigBee, or proprietary short-range protocols. The kit is pre-installed with an OTA-updatable Linux stack based on Yocto Project code. It automatically connects to a pre-registered Google Cloud account. Up to 50MB of data per month can be uploaded to the cloud platform free of charge.

A Home Automation system using a Raspberry Pi 2 and Windows 10 IoT Core including an App. Story Update 2: The...