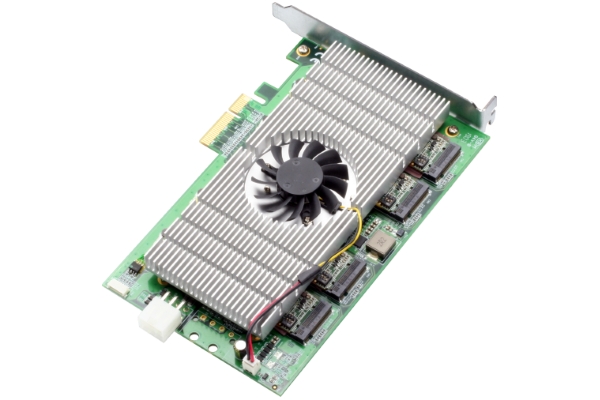 While most PCs are capable of handling AI applications, the computations required are often quite complex and data intensive, limiting the speed at which the AI inference can operate, or slowing down performance of other applications which must run simultaneously. The AI Core XP4 and XP8 allow users to offload the AI inference from the main CPU processor, speeding up AI processing, and freeing the CPU to handle other important tasks.

The AI Core XP4 and XP8 feature four (XP4) or eight (XP8) Intel Movidius Myriad X VPUs. Each Intel Myriad X VPU is capable of speeds up to 105 fps (80 typical) and up to 1 trillion floating point operations as a dedicated neural network. This means a performance of up to 840 fps (560 typical) with the AI Core XP8, providing incredible processing power for your AI applications.

The AI Core XP4 and XP8 bring users scalability not offered on any other PCIe based AI module card. While other cards are designed with VPUs soldered directly onto the boards, the AI Core XP4 and XP8 are designed by combining two to four AI Core XM 2280 modules onto a single card. This means the AI Core XP4 and XP8 feature four M.2 slots, allowing users the ability to scale the capabilities of the card to match their needs. Users can easily add an additional AI Core XM 2280 module to the AI Core XP4 giving the power of six Intel Myriad X VPUs. This scalability is perfect for users whose processing needs may change over time, or are unsure exactly how much performance they need; providing the option to change the power available without having to buy an entire new card.

Scanning QR code on Raspberry pi using ZBar. We can use our Webcam to scan QR Codes with the help...