[AndreaFavero] says that the CuboTino emphasizes simplicity and cost-savings over speed. However, solving the puzzle in about 90 seconds is still better than we can do. The plucky solver uses a Pi and a camera to understand what the cube looks like and then runs it through a solver to determine how to move. 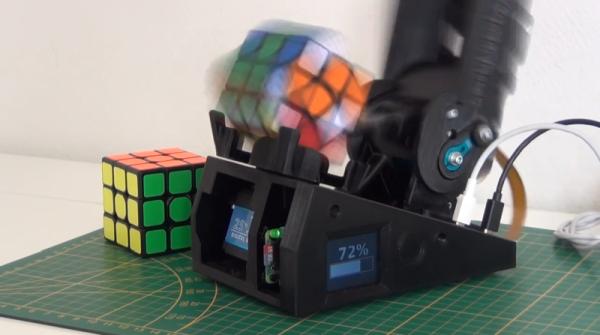 Watching the video below, we were impressed with the mechanics. The titled surface solves a few problems and makes manipulation easier. The way the mechanics are arranged, it only takes a pair of servos to flip the cube around as you like.

Apparently, out of the 90 seconds it takes to solve the cube,  about 30 seconds is just looking at it. This isn’t a quick afternoon 3D print. There are 13 separate parts, although all should be fairly easy to print.

Granted, we’ve seen plenty of cube solvers before. But it is always interesting to see how different people approach the same problem. This machine, by the way, is an evolution of an earlier one we’ve seen from [AndreaFavero] before. If you think the instructions look a little light, note that you have to download the full instructions as a PDF file. That’s where all the details are.

If you want to build something more complex, you can go faster. As you’ll see, though, it is a lot more work to get that extra speed.

Source: ANOTHER RUBIK’S CUBE ROBOT IS SIMPLE BUT SLOW

Finding the right angle to approach a Raspberry Pi project can be tricky. Still, maker and developer Parisiancyclist, as he’s known on...