Another week another Raspberry Pi clone has been created in the form of the Banana Pi BPI Pico RP2040 offering an alternative to the smaller Raspberry Pi range of mini PCs and equipped with a Dual-core ARM Cortex M0+ CPU cores (up to 133 MHz), supported by 264K SRAM and 2MB Flash. The tiny microcontroller features 26 available GPIO pins, 4 of which support ADC analog input as well as a USB-C socket and JST SH 1mm 4-Pin socket. 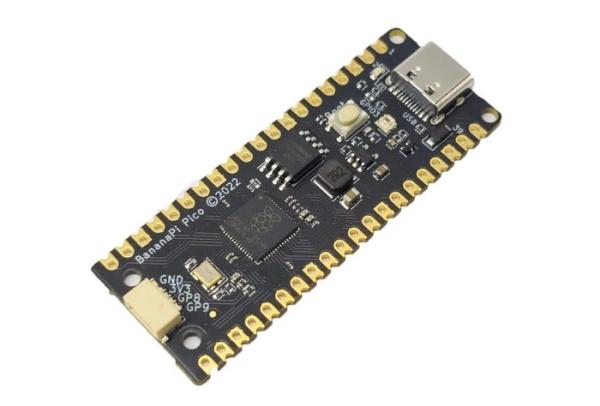 The low-power single board computer should be compatible with accessories also compatible with Raspberry Pi’s Pico as the two boards are newly identical although the BPI Pico is 5 mm longer than the Raspberry Pi Pico. The Banana Pi BPI Pico RP2040 microcontroller is now available to purchase for around $5.

“BPI-Pico-RP2040 is a microcontroller development board launched by Banana Pi equipped with RP2040 chip. Its most notable feature is to add a Onboard WS2812 color LED; replace the 3-Pin DEBUG interface with a JST SH 1mm 4-Pin socket, which can be connected with Qwiic & STEMMA QT or any possible peripherals; replace the micro-USB socket with a USB Type-C socket , supports reversible insertion, and is compatible with the USB Type-C cable of most modern smartphones, no additional purchase is required.”

Developers, hobbyists and Raspberry Pi enthusiasts searching for a RFID or NFC reader powered by a Pico W sure to be interested in a new Kickstarter...