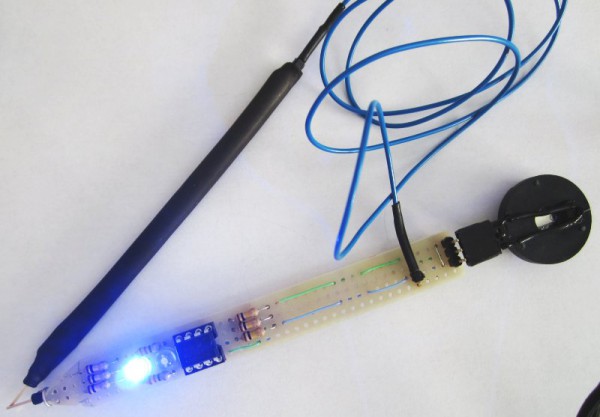 Sometimes you need to check one circuit and test some of its nodes. Usually a tester in voltage mode is a good solution, but it has a pair of problems. First, it measures about zero both when the node is driven at zero volts and when the node is floating (not driven at all). Second, it gives the information on the tester display, so you need to take the view from the circuit to the tester to check the voltage.
The proposed circuit somewhat qualifies as a logic probe. It should give no indication when the node is not being driven and it should give a different indication when the node is driven at high or a low voltage.
A lot of logic probes are not self powered. They rely on the circuit supply to operate. In my case I would like the probe to be usable also a as a continuity tester. If we set ground in one point of the circuit and we probe another point, the continuity can be detected between both points because a low level will be driven even if the circuit is not powered at all.

In the end, the circuit puts a 1.5V voltage on the probe tip, provided by the two 100k resistors, so it behaves like a 1.5V source with a 50k series resistance. If the probe voltage is kept between 1V and 2V, no LED is lit. If the probe voltage is below 1V, the blue LED turns ON. And if the probe voltage is above 2V, the white LED will turn ON.
When you probe a node in the circuit, you can sense its voltage using a high impedance voltmeter. That will give you the open circuit voltage (Voc). This voltage can be driven with different strengths. The drive strength is related to the equivalent resistance at the node. For a linear non reactive circuit it will be the equivalent Thevenin resistance. In the end, the equivalent circuit will be something like that:
Here we have the 1.5V and 50k resistance provided by the probe and the Voc and Rth associated with the probed node. As we know, the LEDs will lit when the probe voltage Vp is above 2V or below 1V. The following graph shows the LED status as function of Voc and Rth.
For low Thevenin equivalent resistances (below 1k) only the Voc voltage determines if each LED is lit of not. For higher node resistances the threshold Voc voltage shifts due to the resistor interaction in the circuit.
We can see that at 100k Thevenin resistance we need 0V to lit the Blue led. For higher resistances we will need a negative voltage to lit the LED. Same for the white led: at 100k or more Thevenin resistance you need more than 3V to turn ON the LED. So, the circuit, not only senses the node voltage but also its drive strength.
From the curve we can see that, when used as continuity tester, it can detect continuity (or lack of isolation) for resistances up to 100k. To lower the resistance detection threshold, the  R1 and R2 resistors could be changed for lower values.

Effects of the probe on the circuit under test

Measuring any magnitude always modifies the device under test (DUT). Sometimes this error is negligible. For instance, using a good quality voltmeter to measure the voltage between two nodes usually introduces a 10 megaohm resistance between the measured nodes.
Measuring the drive strength always affects the DUT. In our case we are applying a 1.5V voltage with a drive strength of 50k. If the node has a Thevenin resistance similar or higher than 50k, we are actively modifying the node voltage and potentially inducing a modification in the behaviour of the DUT.

Give it some protection

As explained before, resistor R3 should not have any current in normal operation. IC inputs,  like the ones on the MCP6002 device, don’t like to be driven above Vcc (3V in our case) or below GND. Trying to go outside of this limits will trigger the internal protections on the device. The R3 resistor guarantees that it will not cause a high input current.
The circuit has been used to probe a low impedance 20V node and it operated correclty, detecting a higher than 2V level, without any harm done to the probe. This would not be the case if R3 wasn’t present.

If the tip voltage changes with time alternating between voltages over 2V and below 1V, both LEDs will lit during some time. At low frequencies the blinking is apparent. At higher frequencies, over the Flicker fusion frequency, both LEDs seem to be lit at the same time. The circuit, however, due to some technical limits like the use of opamps instead of comparators has a maximum frequency of operation at about 50kHz. A square signal over this frequency doesn’t lit any LED.
This is no problem as the main purpose of the probe was to test static nodes but it should be taken into account for dynamic nodes. It is usual for logic probes to have an special detection mode for pulsed signals with frequencies up to several MHz. This is not the case in this circuit.

The probe has been fabricated in a prototyping perfboard.
From left to right you have the probe tip, the three R1, R2 and R3 resistors, both LEDs and their R7 and R8 resistors, the MCP6002 dual opamp and the three R4, R5 and R6 resistors.
Ending the board we have the ground connection and the three pin power connector.
The LEDs are close to the tip so that we don’t need to move the eyes from the circuit to check if they are lit.
The back side of the probe board is shown in the following figure. All the wiring has been done using thin, isolated, solid wire.

What is my IP?

Particle + Raspberry Pi On November 2015, Particle announced that they will be providing a mechanism to connect any Raspberry...