Raspberry Pi launched the new version of its compute module providing twice the RAM and roughly 10x the CPU performance of the original Module. Compute Module 3 (CM3) fits into a standard DDR2 SODIMM socket and provides the same basic processing capabilities as the Raspberry Pi 3. It is designed for professional engineers who would like to develop embedded systems. 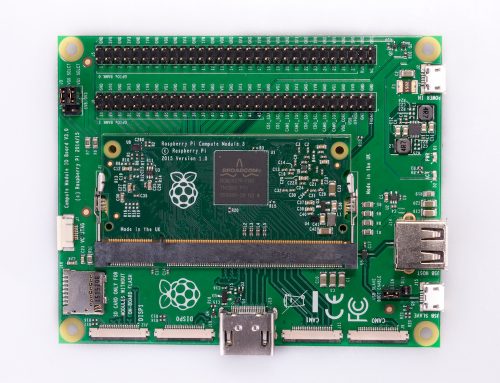 CM3 comes in two versions. The first is the “Standard CM3” that features a 64-bit Broadcom BCM2837 application processor, built around an ARM Cortex-A53 quad-core processor running at up to 1.2 GHz, with 1GByte RAM, the same as Pi3, and 4 Gbytes of on-module eMMC flash. The second version is “Compute Module 3 Lite (CM3L)” which still has the same BCM2837 and 1Gbyte of RAM, but brings the SD card interface to the Module pins so a user can wire this up to an eMMC or SD card of their choice.

“The idea of the Compute Module was to provide an easy and cost-effective route to producing customised products based on the Pi hardware and software platform. The thought was to provide the ‘team in a garage’ with easy access to the same technology as the big guys.”

Raspberry Pi also released an updated version of the Compute Module IO Board V3 (CMIO3). This board provides the necessary power to the module and gives you the ability to program the module’s flash memory or use an SD card for the lite version, to access the processor interfaces through pin headers and flexi connectors. In addition, it provides the necessary HDMI and USB connectors.

This board provides both a starting template for those who want to design with the Compute Module and a quick way to start experimenting with the hardware, and building and testing a system, before going to the expense of fabricating a custom board. The CMIO3 can accept an original Compute Module, CM3, or CM3L.

Story Do you want to get hands-on with Windows IoT having a Raspberry Pi B Version 2 sitting around ......