This project is basically a home theater PC (HTPC) built to be used in a vehicle so it is mobile. I had been calling it an MTPC, but my kids just call it “The Little Black Keyboard” when they ask to use it.

My wife’s Dodge Grand Caravan came with a really great entertainment system, but I thought I could make it better. It plays mp3 and other audio files from a hard drive built into the double DIN dash unit, but for video it can only play DVDs and it can’t store video files. This means you have to carry a bunch of DVDs around, cluttering the car. 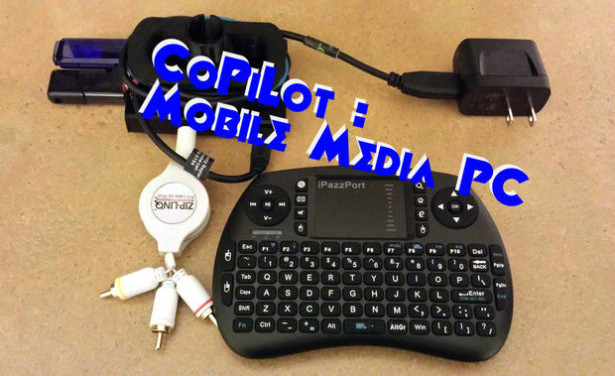 I wanted a way to play files from a thumb drives instead of from disks because there is less possibility of the disks getting ruined or lost. There is also the added benefit of the kids being able to change the movie from the back seat, so they don’t have to wait until the passenger can change the disk and the passenger doesn’t have to read the movie list for the viewers. On long car trips, this thing is a huge help.

Some minivans are starting to include HD entertainment systems, but the 2013 Caravan wasn’t one of them. There are 3 RCA inputs behind the left sliding door, so if I was going to play movies I needed an analog source (which is increasingly difficult to find these days).

I have had a Raspberry Pi B+ that I bought to tinker with and use as an Octoprint 3d print server, but I thought I needed something like the Pi model B because it had the 1/8″ headphone and the yellow RCA for analog video. Then I discovered that the 1/8″ connector on the B+ is actually a 4 conductor jack that provides stereo audio and video as long as you have the right cable to use it. Since we were planning a family roadtrip, I quickly threw this thing together and I was really pleased with the result. If you bring an HDMI cable along for the ride, you can even use it to play movies when you stop in a hotel.

Here's how to make a Lego robot you can control from any screen over wifi. It also has a webcam...