The idea behind this project was to build a large digital picture frame at a lower cost than the ones you could purchase. It needed to be easy to build and operate smoothly. I concentrated on setting up the computer/software side first before building a wooden frame and mounting the monitor to the wall.

I have written the instructions in a modular way so that you only need to complete the parts you require, for example, the light sensor, touch sensor, and frame are optional. I have also included a section at the end of unsuccessful software choices if you are considering other options in this space. Music: L’Outlander – City On A Hill, provided by Lofi Girl

Why I built it this way

There were a number of lessons learned in getting to the final project build. 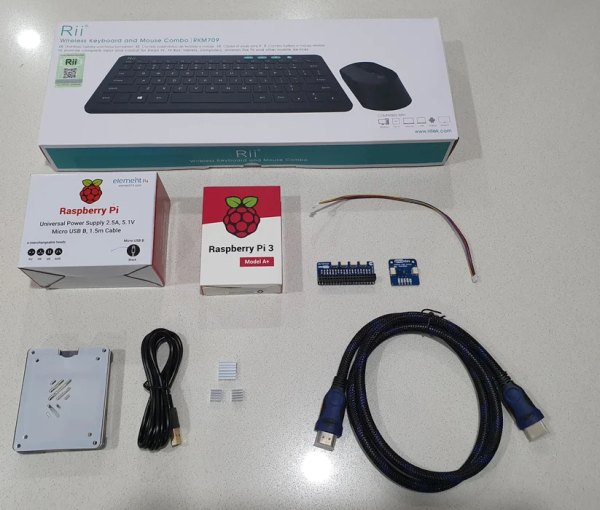 The hardware I ended up using

Hardware that I could have done without, but used anyway 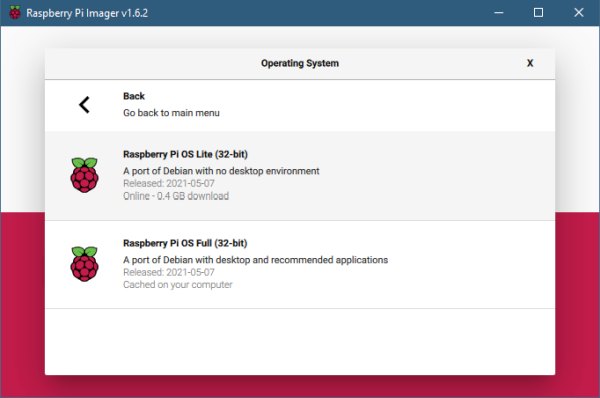 To install the OS you need to image an SD card. Simple instructions and the download can be found here. I ended up installing the Raspberry Pi OS Lite (32-bit) with no desktop environment as I wanted to keep it snappy.

Using the shortcut CTRL + SHIFT + X when setting up in the Raspberry Pi Imager will allow you to set up a Hostname, configure Wi-Fi, enable ssh and a password, and other local settings (there is also a 45-second video on this page). 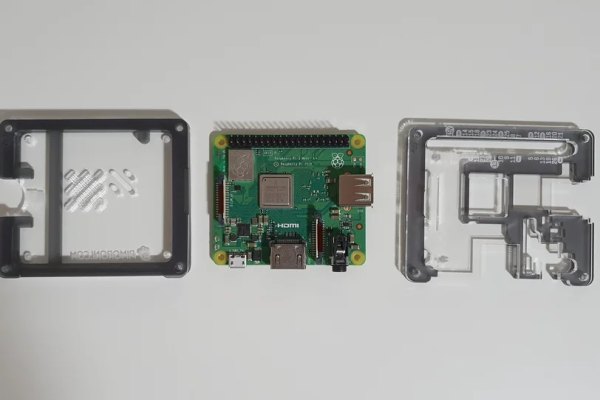 Fitting a case was a top priority to protect the Raspberry Pi from any mishaps. I used the Pimoroni Pibow case as it had room to access the GPIO header and still attach the heatsink. The case came with instructions in the form of a YouTube link which made assembly easy.

Attaching the heatsink was as easy as peeling back the tape on the flat side and applying it to the Raspberry Pi.

Connect the Raspberry Pi up to your keyboard, monitor, and power. Once you get to the login screen enter your credentials. The default username is “pi” and the password is generally the one set up in Raspberry Pi Imager earlier under ssh.

You should also have network/internet access if you entered in your Wi-Fi details earlier. Let’s now update the Raspberry Pi OS. At the terminal enter:

The “sudo” part of the command allows you to run programs with security privileges, as with “Run as Administrator” in Windows.

Once that is completed we need to install FBI.

At the terminal enter:

FBI is now installed, how easy was that!

Copy over some pictures

Let’s make a directory/folder, I was still under /home/pi so I typed in:

It’s easy to move files from your Windows PC to your Raspberry Pi using the command SCP on your windows machine. First, you will need to know the IP address of Raspberry Pi, so at the terminal type:

Now on your Windows PC, from the command prompt, you will need to enter in a command similar to the below, using the path location where you saved your pictures and the IP address you got from the ifconfig step above.

It will prompt you for the Raspberry Pi password, then it will copy everything over from the folder specified.

FYI: later in this guide we will set a static IP address if required.

First, navigate into the pictures directory on the Raspberry Pi:

This should cycle through your jpg images, changing every 5 seconds.

I ended up using the below command in my automatic startup script:

Copy a file from Windows to Linux: https://bharatdwarkani.medium.com/copying-a-file-from-windows-to-linux-through-ssh-17f4f4c2eca8

Install and use FBI: https://www.raspberrypi-spy.co.uk/2017/02/how-to-display-images-on-raspbian-command-line-with-fbi/

You may have found your terminal window (and therefore your pictures) aren’t running at the correct resolution, maybe even running in a letterbox on your monitor. So let’s configure the screen resolution:

Under “display options” than “resolutions” select the correct resolution that your TV or monitor supports.

You will notice that the list is split under DMT and CEA.

Select the correct one relating to your monitor. Restart and test FBI again to make sure you’re happy with the results.

First, we need to automatically log in to the command line. This can be set up in the Raspberry Pi configuration tool under System Options” > “Boot / Auto Login” > Console Autologin

I added the FBI launch command we created earlier under a file called .bashrc. To edit .bashrc run the command:

Then scroll down to the very bottom and add-in:

Now restart your Raspberry Pi and you should have a working Digital Picture Frame.

This step is not a tutorial but a guide. What we want to achieve is to compile ddcutil so we can issue terminal commands to change the brightness on the external monitor, eg: just like pressing the buttons on the monitor but in this case, the software controls these actions.

Before heading down this path make sure your monitor supports this feature DDC/CI. In Windows, you can install an application called “Monitoring” from the Microsoft store to test that it can work.

Compile ddcutil by downloading the source and following the instructions on here http://www.ddcutil.com/building/. I was able to apt-get install all the dependencies listed on that page (remember to install the -dev versions). I kept installing packages listed on that page until ./configure ran.

Also, make the changes to /boot/config.txt specified at http://www.ddcutil.com/raspberry/ and reboot. I needed to add:

After rebooting, I was able to set the brightness of my monitor using the command:

If you can get that working, sending some bash commands using values from the light sensor in the next section is easy.

The PiicoDev Ambient Light Sensor was easy enough to plug in (see Reference material), but getting the module installed and running from the command line was not as straightforward for me. Again, this is more of a guide rather than a tutorial.

You will need to enable i2c, to do this from the command prompt you will need to run the configuration tool and find the enable selection in the menus:

I also had some issues with i2c loading so I first had to check that i2c loads.

You will also need to install Python to run the example script and PIP3 to install the Ambient Light Sensor modules.

When running the test script from core-electronics I had a lot of issues with different Python versions. What helped was checking if my module was installed using:

And found out that the module was installed under python 3, therefore instead of running:

I needed to run:

The original example script was then modified, This was my first time writing a Python script so please excuse my bad code!

Every ~5 seconds “light Val” will be populated with a lux reading.

I wrote the script to have 4 different levels of brightness, from 0 to 75 (I did not go above 75 as my monitor would display a warning message about power consumption).

I wrote the script to only issue a command to change the monitor brightness if the level changed, so that’s why it checks if the state is not equal to the last state before issuing the command.

Once tested I then configured the script to run on startup (next step).

Note: Your final installation will require you to adjust the lux change values for your room, I also renamed main.py to light.py later in the project.

The Python script needs to be run on startup and in the background. I decided to run this in .bashrc

and added the line above my last

I probably should have done this earlier, but you will want to set a static IP for your Digital Picture Frame, this will allow you to easily transfer pictures or art using the command “SCP” from windows in the future.

To do this you will need to edit dhcpcd.conf

As I am using a wireless network connection (Raspberry Pi 3 Model A+ only has Wi-Fi built-in) I need to add/edit “wlan0”.

In dhcpcd.conf I added the static wireless IP details after the “Example static IP configuration” for eth0.

When completed, Ctrl + X to exit and Y to save.

Then reboot and make sure your changes have been made using ifconfig.

It might also be a good idea to ping a website to make sure you haven’t broken anything! 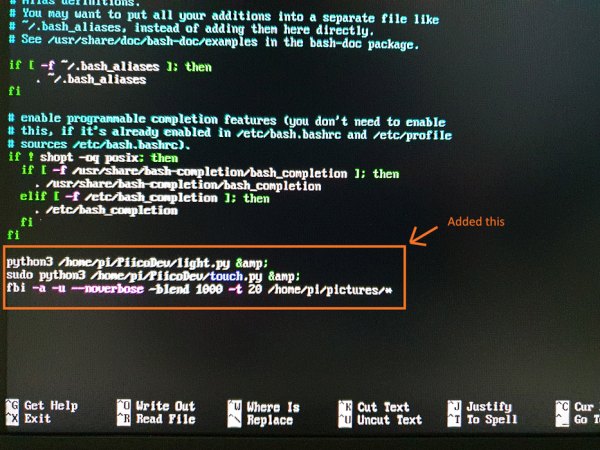 Adding the PiicoDev Capacitive Touch Sensor was an afterthought when I realized I wanted to be able to safely shut down the Raspberry Pi, and what better and easy way than to add another PiicoDev Sensor!

The advantage of adding the PiicoDev Sensor was in addition to adding the shutdown button, the additional two buttons allowed me to add functionality to show the next image or show the previous image.

I realized I had already installed the Python modules required to run the Touch Sensor (see Light Sensor step), so I downloaded the example script, tested and then started editing.

Show next or previous image in FBI is controlled by pressing “page up” and “page down” on the keyboard, to simulate keyboard presses I install a module called keyboard for python:

When running and testing this script, the keyboard module will require you to run as sudo

Add this to launch at startup by editing .bashrc. To edit .bashrc run the command:

Then add the following line below the light script, see the photo attached to this step for my final edit of .bashrc 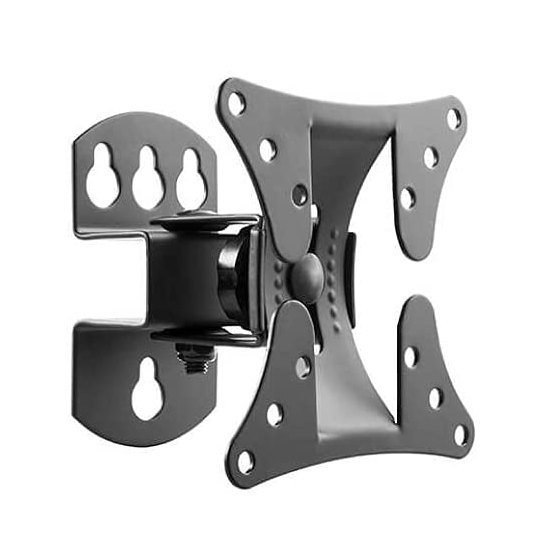 I decided to mount the monitor to the wall using a VESA mount, this would allow secure mounting of the monitor (the heaviest part, with the wooden frame just being attached to the monitor in the next step.

There are many choices of VESA mounts, just make sure you leave enough room for the Raspberry Pi at the back.

Ideally, I would have liked to mount the monitor a little closer to the wall, but I choose this mount as I could easily take the monitor off and on the wall for any future adjustments. 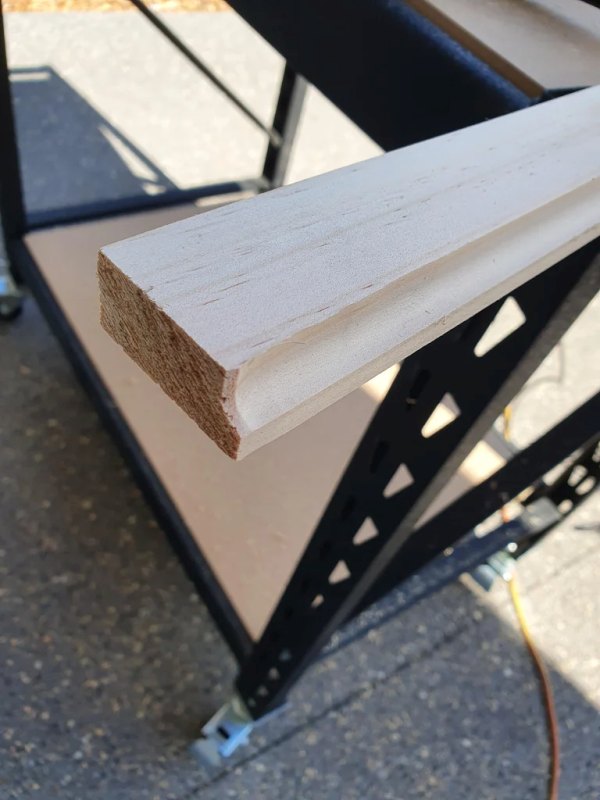 To make it look more like a picture frame and not just a monitor mounted to the wall I added a wooden frame around the monitor.

The picture frame was made with the tools I had available. If you are fortunate enough to have additional tools, this would make the build a lot easier.

Final adjustments for the future:

I had some issues with the Capacitive Touch Sensor cables being so long and taped together. I did separate them, which did help but I will eventually move the touch sensor closer to the hooks (buttons) and shorten the length of wire used.

Murata Manufacturing has developed the world’s firstmultilayer ceramic capacitor with a capacitance value of 1.0μF in the 01005-inch size (0.4×0.2mm),...