In a previous post, I showed you an Arduino based controller to manage the lighting system in the house. Such a device is useful for handling the basic ‘electrical’ stuff such as lights, doorbells, gates, knobs and buttons. 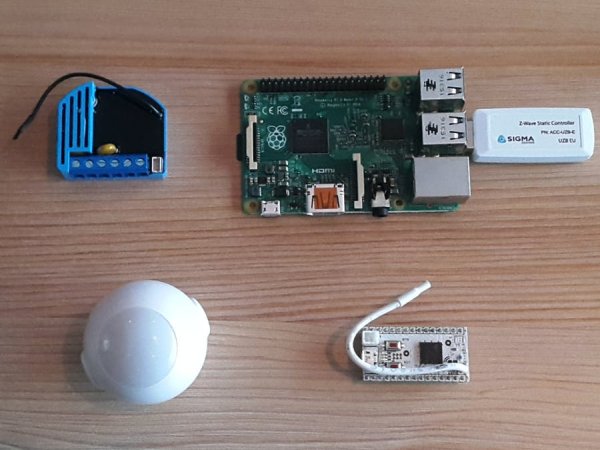 For other home automation/control desires, you often need to put special purpose devices in difficult locations, such as roller-shutters near the windows, RGB-controllers in the ceiling.

To accomplish the latter, for this project, I’ve opted not to build all these devices myself, but instead go for a ready made solution, based on the Z-Wave protocol. This project will only cover the basics: setting up the gateway and adding/removing Z-Wave devices.

Note: The gateway is required cause Z-Wave devices can’t directly connect to the internet.

We are going to use:

The software running on the RPi is called pygate. It’s a framework that turns your RPi in a gateway to the AllThingsTalk cloud. The application works with plugins so that it’s functionality can be selected, depending on the project: do you want Z-Wave, virtual devices (web-resources), xBee, associations, scenes, groups, or something else, just pick the plugins that you like and put them together.

For this project, we are going to use the Z-Wave plugin. This module uses the open-zwave libraries for communicating with our devices.

You are now ready to start up your gateway, so reboot the RPI.

Once your RPI is running, it’s time to add it to your account on AllThingsTalk. You do this by ‘claiming‘ your gateway.

Note: The claim code for your gateway, is the MAC address of the RPi, formatted like so: A44A16BF1665. You can find it with the command ‘ifconfig‘ or in the log file of Pygate.

Once your gateway is available on AllThingsTalk, you can start adding Z-Wave devices to the controller. In Z-Wave, adding a device requires both an action on the Z-Wave controller (the RPI) and on the device. The general approach is always:

With Pygate, the procedure becomes:

Read More:  Home Control with a Raspberry Pi and Z-Wave