It’s about time I shared this one with you all. This project has been going so long, you would not believe. I started this before our Hack Space existed [2011 ish?], and has continued to be in a transient ‘not finished, might finish, needs improvement’ state forever. This Instructable will hopefully inspire you to go and do something similar with your own take on what this idea aims to accomplish and/or solve.

I intended to make a cheap/custom version of a Managed PDU that would monitor your internet connection, and power-cycle your modem/router/gateway device on the assumption that it had crashed, and “turning it off and on again” [the network engineer’s favourite cop-out/easy fix!] would fix all that. 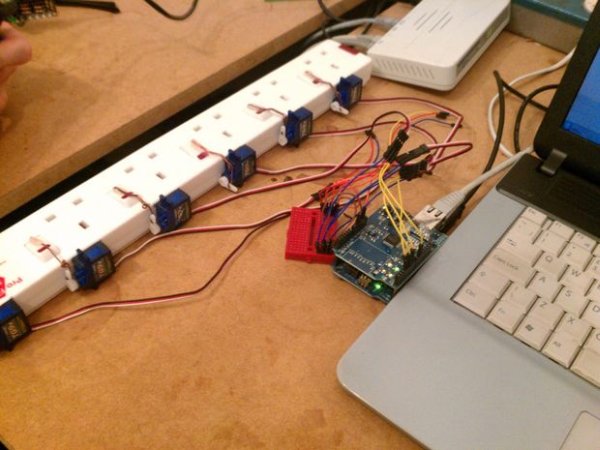 This project started life as a concept plus a few hastily-bought bits, and the idea was demonstrated at a Bar Camp many years ago in my current home town of Newcastle upon Tyne in England. Since starting the project, I have had the device on show at several Maker Faires and Tech Events of a similar nature, but the servos were simply set to randomly turn on-and-off often enough to impart how the mechanical aspect worked.

A lot of people have wondered why I chose to use Servos linked to switches instead of, maybe, perhaps, Solid State Relays or something similar. The reason for this is quite simple: Accessibility and safety. This solution means that no-one needs to mess directly with dangerous 240v mains electricity, so it widens the base of Makers that would be able to take on this project, or something similar. It also means you have a neat row of sockets to plug everything in, no messing with double-gang space-wasting sockets. 😀

Right, with all that lengthy pre-able out of the way, better get cracking with the project documentation…

These are the minimal items you’ll need to complete this project:

The minimum tools you’ll need to complete this project are:

Step 4: Position and fix the servos

If, instead of the copper-wire levers, you would like 3D printed levers, follow these instructions. It may be good to refer back to the ‘Copper linkage’ instructions that detail how to create the copper levers, as there is a bit more detail about how to correctly size and position the linkages.

It will be fine for you to test that all your servos adequately operate the switches, if you hook them up one-by-one.

These 9g servos normally have three wires that come from the motor housing and terminate in a 3-pin female header/connector. The wire colour key is typically as follows:

NOTE: If you want to be 100% certain, please check the manufacturer’s specification/technical sheet for your servo model.

The following connections will work for the example ‘servo sweep’ sketch:

The test sketch you can use is on the Arduino.cc site:
https://www.arduino.cc/en/Tutorial/Sweep

Keep an eye on the servo as it sweeps through its full rotation. The cheap 9g servos seem not to be very accurate, and don’t seem to correctly sweep a full 180 degrees. YMMV! Watch out for the servo ‘binding’, where it gets jammed by a limitation in the mechanics of your linkage and lever setup. If it binds, you may want to modify the minimum/maximum angles for the servo.

This is a small dev board I designed to make experimenting with and deploying the ESP8266 ESP-03 modules a bit easier....