There are a number of widely used methods to connect microcontroller projects to USB, all of which are not entirely satisfactory:

When I therefore heard about a very cheap (40 cents a piece) USB to serial converter IC, the WinChipHead CH340G, I was eager to try it, and bought a few (I bought mine on AliExpress, but they are now also available at Boxtec). A prototype I built on a breadboard worked reasonably well, so I decided to try my hand at a custom PCB design:
To a large part, this follows a reference design from the vendor datasheet, using an Eagle part made by blogger [Ian]. I added a few customizations: 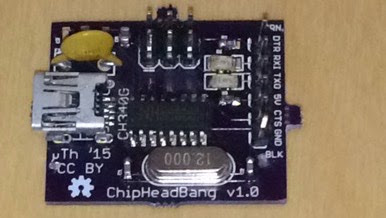 In many ways, the resulting design was a bit more complex than what I had done before: It’s my first design involving an USB connector, and it uses more SMD parts (12) than any of my previous designs. I was therefore quite pleased when I managed to assemble my first copy of it with relatively little drama, and the functionality worked as designed (As usual, my application of solder paste for the CH340 was somewhat uneven, so I had to fix some shorts and one flaky pin connection). The serial connection seems to work even at high rates, and the bitbang programming works at the stately pace of about 1.2KB per minute.
Read more: Introducing ChipHeadBang

This is a short report on how to connect Quick2Wire’s analogue board directly to a Raspberry Pi. The key is...