Kodak has launched a Portrait 3D Printer powered by a Rasberry Pi 3, with a dual-extrusion system, multiple filament types, a 5-inch touchscreen, along with WiFi and Ethernet connections to a Kodak 3D Cloud service. Kodak collaborated with Smart Int’ on the professional, dual extrusion Kodak Portrait 3D Printer that runs a Linux-based OS on a Raspberry Pi 3 board. The device sells for $3,500, and offers connections to a Kodak 3D Cloud service. It is designed for engineering, design, and education professionals. Just like the BeagleBone-based Autodesk Ember 3D printer, the Kodak Portrait 3D Printer is based on a popular Linux hacker board, which is a Raspberry Pi 3 running Kodak’s Linux-based 3DprinterOS print management software. 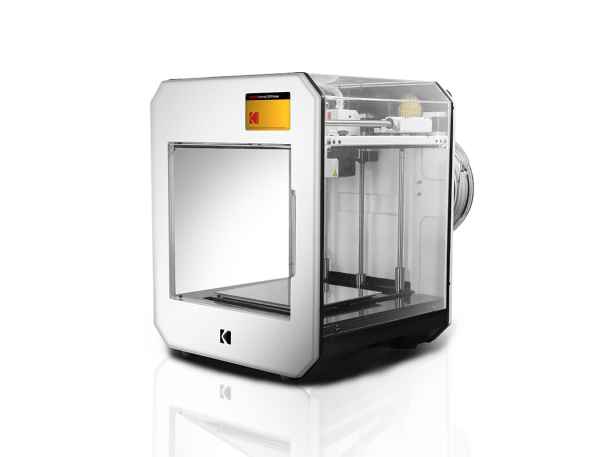 Other 3D Raspberry Pi printers include the industrial-oriented, $4,500 and up AON 3D Printer. A host of Raspberry Pi 3D printer hacking projects are available, many of which use OctoPrint’s RPi-compatible software. The Kodak Portrait 3D Printer has a dual extrusion system with a 1.75mm filament diameter and automatic nozzle lifting. According to Kodak, the extrusion system provides swappable PTFE and all-metal hotends “for optimal material compatibility”. The printer has a 0.4mm nozzle with 20-250 micron layer resolution and XYZ accuracy of 12.5, 12.5, 2.5 microns. It offers 16mm XY motion and 12mm Z motion. A sensor alerts you when your filament is almost gone. Materials available include different grades of PLA, as well as ABS, Flex 98, HIPS, PETG, water-soluble PVA, and two grades of Nylon.

The Kodak manufacturing materials are available in a wide color palette, including Kodak’s Trade Dress Yellow. They claim to offer low moisture packaging and high dimensional accuracy. The 455 x 435 x 565mm printer has an all-steel structure which allows high-temperature build, with support for up to 105ºC build plate and up to 295ºC nozzle temperatures. A fully-enclosed print chamber with a 200 x 200 x 235mm build volume features a HEPA and activated carbon filter, thereby

A BRIEFCASE PENTESTING RIG FOR THE DISCERNING HACKER

In the movies, the most-high tech stuff is always built into a briefcase. It doesn’t whether whether it’s some spy...