MakeProAudio has announced an ambitious MPA Platform for creating — and recreating — professional audio systems out of modular components. The Linux-driven MPA Platform is designed for “tinkerers, inventors, DIYers, hobbyists, hackers, audio anarchists and musicians,” says the Cologne, Germany-based startup. The initial MPA Platform “MakeKit” due in June for “under 200 Euros” is built around a Raspberry Pi.

The MPA Platform is comprised of various board-level Tiles that combine to create Blocks. These include Control, Hybrid Control, Synth, or Mixer Blocks that can host up to 16 inputs and 16 outputs. The Blocks can be combined into a variety of MIDI controllers, synth platforms, digital mixer and interface boards, and more. 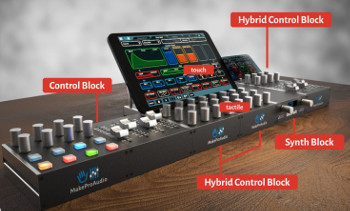 The Tiles include Compute Tiles such as the initial Pi Tile, which supports a bring-your-own Raspberry Pi Model 3 or 3B+. There are plans to develop future MakeKits with Tiles designed for other computing platforms. The SonicState story that alerted us to the MPA Platform mentioned potential Intel NUC and LattePanda configurations.

When you add a new Block, the GLUE control software that runs on the Raspberry Pi automatically recognizes it. Enabled via an embedded webserver, GLUE will initially support MIDI, OSC, DMX, and MQTT protocols, with more planned in the future.

The UI for the GLUE software is available via a mobile app, a touchscreen, or tactile Control Tiles. You can also access GLUE from any HTML browser on the connected network. GLUE makes use of an underlying Network Distributed Software Framework called TAN that lets connected GLUE implementations collaborate in decentralized networks.

We saw no claims for open source hardware, but the software platform appears to be open. MakeProAudio aims to build a maker community and enable developers to create, share, and sell their own Arduino based Tiles based on Arduino technology and an MPA Arduino Library.

The initial Raspberry Pi-driven MakeKit based on the MPA Platform will be available in June starting at under 200 Euros ($224). A soft launch will be held at Musikmesse in Frankfurt on April 2-5 at Hall 8, Booth B10. More information may be found at the MakeProAudio website.

TopJoy Falcon is another upcoming mini laptop that should deliver performance right between the Atom x5-Z8350 processor found in One...