Although scientists are still working toward replacing lithium-ion (Li-ion) batteries with lithium-air (Li-air), or lithium-oxygen, batteries, researchers at the University of Cambridge have developed a lab-based demonstrator of such a battery. It is safe to say we still have another decade before we can begin to utilize such powerful batteries as scientists work to make sure it is stable enough for widespread use. 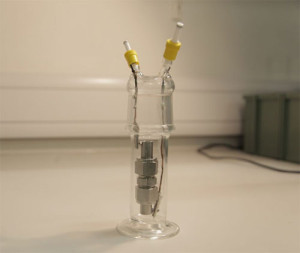 With a theoretical energy density that is being compared to gasoline, Li-air batteries are expected to have 10× the energy density of a Li-ion battery. With the ability to be recharged more than 2,000×, this battery is 90% more efficient. The future goal? To use lithium-air batteries for electric vehicles. Some challenges still need to be faced first for chemical reactions need to be reduced.

Unlike in the Li-ion rechargeable battery, in which lithium ions move from a negative electrode to a positive electrode and back during discharge and while charging, inserting a lithium compound as one electrode material, the Li-air battery uses oxidation of lithium at the anode with reduction of oxygen at the cathode to induce a current flow. Unfortunately, Li-air batteries are not ready for everyday use just yet. According to Dr. Tao Liu from the Department of Chemistry at the University of Cambridge, “There’s still a lot of work to do, but what we’ve seen here suggests that there are ways to solve these problems – maybe we’ve just got to look at things a little differently.”

Unwanted chemical reactions and the fact that they can only be cycled in pure oxygen are stumbling blocks. Using a graphene electrode, carbon dioxide, nitrogen, and moisture are all harmful. Being that the air around us contains all of that, researchers must find a way to cycle only pure oxygen in order to protect the electrode.

Liu and his colleagues, who presented their findings in the journal Science, have attempted to use lithium hydroxide (LiOH) instead of using lithium peroxide (Li202) as a discharge product. They found that adding water also helps, as these cells can tolerate a high concentration of water. This has made the battery much more stable, as there were fewer chemical reactions that were causing cells to die.

For more detail: One step closer to the ultimate battery