Optomyography is a novel, non-invasive, non-contact optical method to measure muscular signals of the human body for diagnosing muscular disorders. It is also considered as an emerging technique for making better human-machine interfaces. Matt, Amrit, and Maneesh conducted an optomyogram experiment at Cornell University to sense the movement of fingers and wrist, and eventually to detect hand gestures. The underlying principle of this experiment is that when you shine an infrared light on a muscle surface, the amount of light absorbed or reflected back depends on the blood volume underneath the skin. Because the blood volume changes with the contraction of muscles, by measuring the variation in the reflected IR light, it is possible to detect the motion of the muscles. 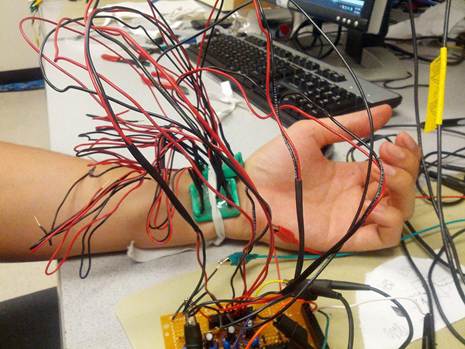 Their sensor unit consists of an infrared emitter and 4 infrared phototransistors arranged in the form of a wrist band. The infrared light emitted by the IR LED is scattered back and is collected by the phototransistors. An Opamp-based instrumentation circuit further filters and amplifies the phototransistor output to obtain nice and clean Optomygram waveform. The amplified signal then goes to a National Instrument’s Data Acquisition System (DAQ) for further processing.

Their team also developed a PC application based entirely in MATLAB. The application provides a nice graphical user interface and also performs sensor calibration. They also implemented a principal coordinate analysis method for the detection of the finger movements. The GUI not only plots the data from the sensor, but also displays which finger of the user was moved. This project was mostly successful and the designers were able to accurately detect the pointer, middle and thumb. However, with adding more sensors in the future, the system performance can be further improved to detect not only all the fingers but hand movements too.

Nabaztag Gets a New Life With Google AIY

Hardware components: Nabaztag Not sold anymore, but maybe on Graigslist or eBay? × 1 Raspberry Pi 3 Model B ×...