Purism, the company behind the Linux-based, open source Librem laptops and upcoming Librem 5 smartphone, has launched a Librem One “ethical services bundle” via a $7.99 per month subscription service. Librem One offers privacy-focused, encryption protected alternatives to typical mobile communications apps found on Android and iOS smartphones.

There’s also a new privacy-oriented platform for home automation. Last week, Mozilla announced it had changed the name of its open source, Raspberry Pi focused Project Things IoT stack to WebThings. The company also released WebThings Gateway 0.8 with new logging and alarm features and launched a new project for an OpenWrt-based router version of the gateway (see farther below). 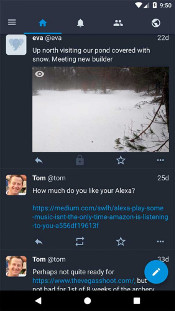 Librem One’s suite of apps and services are based on software planned for the Librem 5 phone, which has been delayed until the third quarter, and is confirmed to run NXP’s i.MX8M Quad processor. The software is also similar to Librem laptop apps. The difference is that it has been designed to run on Android and iOS phones via a downloadable app.

Last month, Purism announced that the Debian Linux based PureOS that underlies all these apps will be a convergent platform across mobile and laptop form factors, a la Canonical’s failed Ubuntu Touch experiment. The latest version of the GNOME-enable PureOS “has laid the foundation for all future applications to run on both the Librem 5 phone and Librem laptops, from the same PureOS release,” says the “social purpose” company.

The Librem One bundle includes end-to-end encrypted chat, email, and VPN services, as well as an “open public” social network. Librem One has no ads, and Purism promises not to track users or “look at, sell, or share anything people create or send.” Unlike Google, Facebook, and Amazon, Purism won’t “resell private information for profit.”

The Librem One subscription service goes for $7.99 per month or $71.91 per year. There’s also a basic tier with encrypted chat and public social that can be downloaded free, although users are encouraged to pay up to $5.99 per month. The launch is set up like a crowdfunding campaign, and it’s unclear whether Librem One will continue with the launch if it fails to meet its 5,000-backer goal by the end of June.

Purism never calls Librem One a fully open source offering. However, the service “utilizes open standards and free software that align with Purism’s mission of respecting people and doing social good for society,” says the company.

The Librem One apps include:

Mozilla announced the release of WebThings Gateway 0.8, the main component of an open source, Linux-based WebThings home automation stack previously referred to as Project Things. The free gateway is still based on the W3C’s Web of Things (WoT) standard and optimized for use on the Raspberry Pi. There’s also a WebThings Framework for developers to build other WebThings software based on reusable software components.

Like Purism’s Librem One stack, the software targets users concerned about corporate privacy invasions and security breaches. The Mozilla promises not to snoop on users or sell their private data are much like those from Purism.New features in WebThings Gateway 0.8 include the ability to privately log and graph data from smart home devices so you can analyze power consumption and usage patterns. A new alarms feature lets you check whether an alarm is active, as well as configure notification rules in case the alarm is triggered. In addition, you can now easily reconfigure the gateway for a new WiFi access point without requiring command-line input on the Raspberry Pi.

Mozilla says it is working on an OpenWrt-based WebThings Gateway for Wireless Routers platform that can act as its own WiFi access point stack. The gateway will evolve into a “software distribution for consumer wireless routers,” says the company.

Purism’s Librem One appears to be available now for Android and iOS for $7.99 per month or $71.91 per year. There’s also a basic tier with chat and social apps available for free or up to $5.99 per month. More information may be found in the Librem One announcement and website.

Read more: Purism’s Librem One and Mozilla’s WebThings focus on privacy for phones and home automation