Qualcomm announced back in April its QCS605 SoC, calling it “the first 10nm FinFET fabricated SoC, built for the Internet of Things.” The octa-core Arm SoC is available in an Intrinsyc Open-Q 605 SBC with full development kit, including a 12V power supply which is available for pre-order at $429. The product will ship in early December.  The QCS605 has a Qualcomm Vision Intelligence Platform, a set of mostly software components that include the Qualcomm Neural Processing SDK and camera processing software and also the company’s 802.11ac WiFi, Bluetooth connectivity and security technologies. 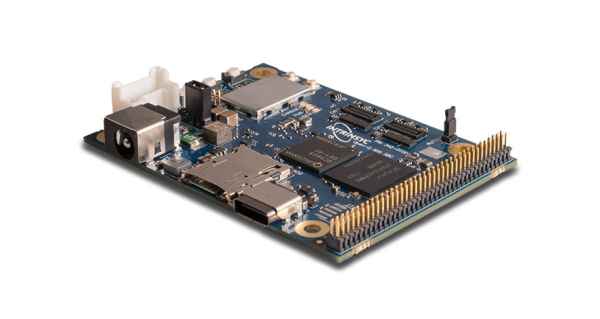 The QCS605 can run on Linux or Android, but Open-Q 605 board supports only Android 8.1. Intrinsyc also recently released an Open-Q 624A Development Kit modeled on a new Open-Q 624A SOM. The QCS605 SoC is equipped with 8x Kryo 300 CPU cores, two of which are 2.5GHz “gold” cores that are equal to Cortex-A75. The other six are 1.7GHz “silver” cores like the Cortex-A55 — Arm’s more powerful follow-on to Cortex-A53. The QCS605 also incorporates an Adreno 615 GPU, a Hexagon 685 DSP with Hexagon vector extensions (“HVX”), and a Spectra 270 ISP that supports dual 16-megapixel image sensors. Qualcomm also has a QCS603 model on sale, which is identical except that it has only 2x of the 1.7GHz “Silver” cores instead of six.

Qualcomm markets the QCS605 as part of a Vision Intelligence Platform, which is a combination of software and hardware starting with a Qualcomm AI Engine built around the Qualcomm Snapdragon Neural Processing Engine (NPE) software framework. The NPE enables analysis, optimization, and debugging tools for developing with Tensorflow, Caffe, and Caffe2 frameworks. The AI Engine also includes the Open Neural Network Exchange interchange format, the Android Neural Networks API, and the Qualcomm Hexagon Neural Network library, which enables the porting of trained networks.