Now that the Raspberry Pi 3 Model B and the Pi 3 Model B+ are the latest and greatest in the line of Raspberry Pi Single Board Computers, what’s new? This hookup guide goes through the same process of getting going that worked with the Pi 2, but from a Pi 3 point of view.

Covered in This Tutorial

You’ll need a mouse, keyboard, and monitor to begin with. Once configured, the pi can be operated from its own peripherals or another computer connected over the internet.

Note: The serial port still has a few bugs, so it’s not recommended to use for configuration. Raspbian can be hacked to get it to work but it’s not covered by this guide. This Pi forum post talks about the serial port in more depth.

As a desktop, these materials are required:

You’ll also need an internet connection to get resources! This link can be wired or wifi and must be available for the Pi. For wireless connections, you can use the on board WiFi antenna.

The Pi is straight-forward and easy to put together, but in the event that something doesn’t seem right, this section will give you an idea of what it is supposed to look like. 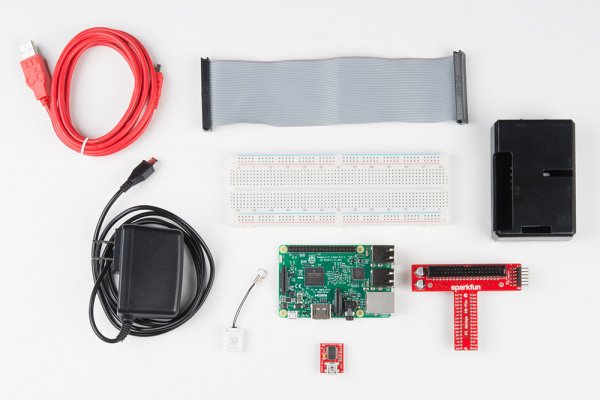 Unbox and gather these components before beginning the assembly 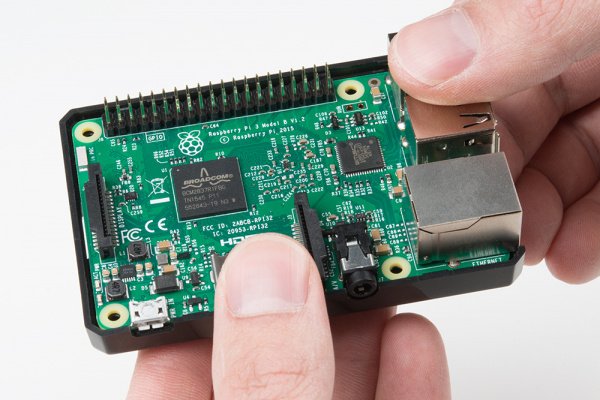 Fit the Pi into the base of the tin. Make sure the Pi is fully seated. Check that the PCB is evenly recessed about the perimeter. 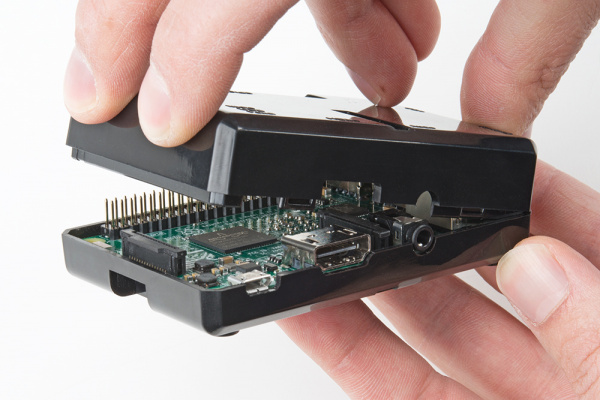 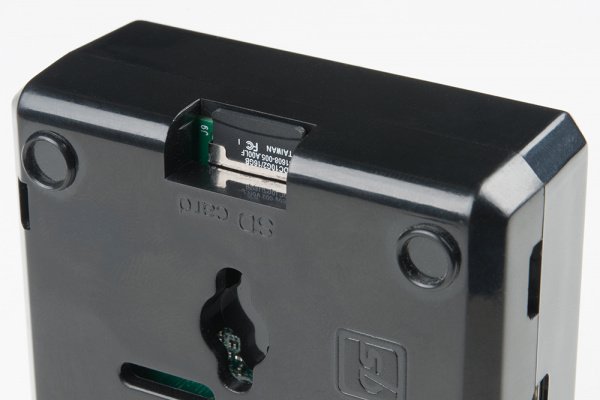 Installing an SD card – make sure the microSD card is flush with the side of the case when inserted properly. The Pi 3 microSD slot doesn’t have a spring as the previous pis did, so if it’s flush with the label outward, it is seated correctly. 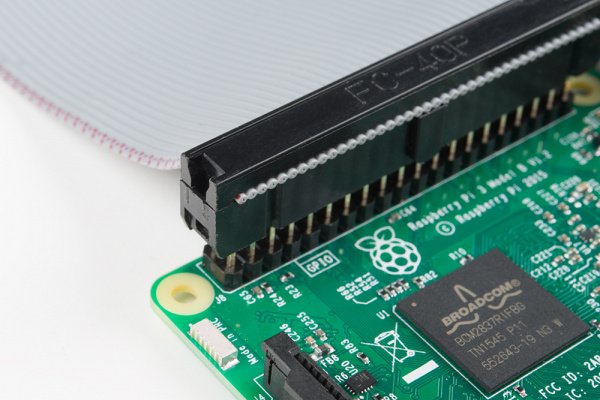 The pin 1 location and silkscreen is the same between the Pi B+ and Pi B. This image shows a partially inserted ribbon cable without the case in the way. The ribbon cable is oriented with the red “pin 1” marking pointing towards the SD card slot. 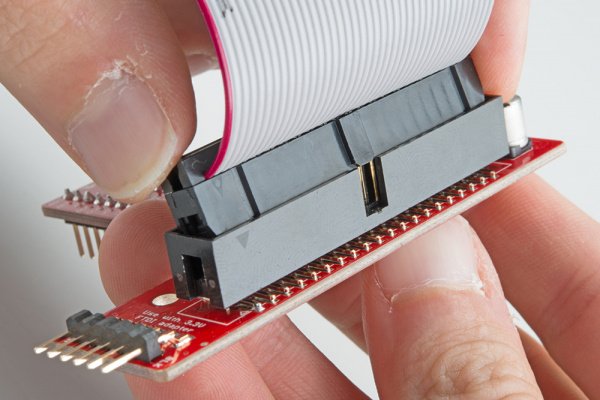 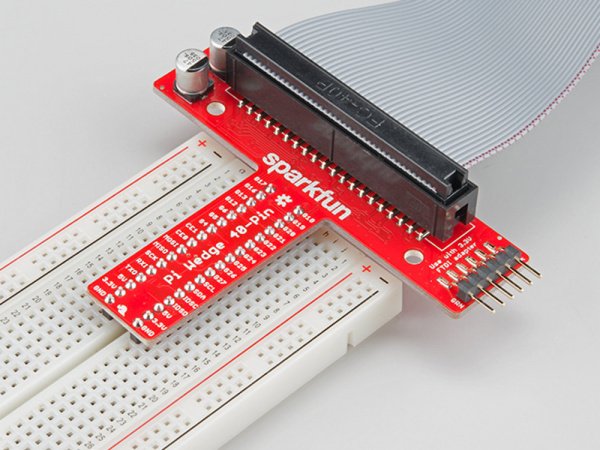 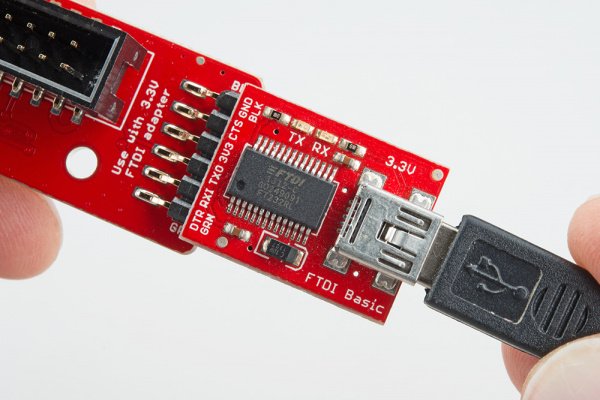 Note: At the time this was written, the kit comes with a 16GB card loaded with the Noobs OS installation image, version 1.9.0. This card should be ready to boot right out of the box.

Getting a New Image

If something didn’t work, or the installation has been corrupted (messing around in the file system were you?), getting a new copy is easy.

That’s it! You’re ready to go. For other imaging, check out this tutorial on sd cards and writing images:

You can also check out this guide from the Raspberry Pi foundation.

Before you apply power for the first time, run through this pre-flight checklist.

Ok, you’re ready to apply the power to the Pi.

Power Adapter Requirement! Make sure the power being supplied is from the included 5.24V, 2.4A power supplyand not your USB connection. The USB most likely won’t have enough current supplying capacity and will result in a brown-out of the Pi that can damage it, and it will likely mess up the files on your SD card.

First, you should see a color chart appear on your screen that indicates the Pi has power and is doing something but doesn’t have software loaded yet.

Next, Noobs asks if the raspbian distro should be installed. Check the box to select it, and choose your language/keyboard layout here (can also be changed later).

Noobs will take a few minutes to manage the partitions and install the OS.

When it’s done, it should report that the OS was installed successfully. Click OK, the Pi will reboot into a graphical interface.

The Noobs default configuration is to auto-log in as user pi, password raspberry.

Once connected to the Internet (see the Configuring the Pi section), it can be a good idea update all the packages that are currently installed. Usually, new packages replace old ones that are faulty, but sometimes new packages have bugs of their own. If your current system is stable and all the functions are good, maybe don’t upgrade. If you’re starting a fresh project though, get everything up-to-date before you start putting in the work.

Enter the following commands in the shell (process takes about 10 minutes).

Methods of Working with the Pi

Once the Pi is configured, there are a few methods of using it depending on if you want to use it like a desktop or manage it remotely.

This section covers using the Pi in the following ways

Noobs 1.8.0, with Raspbian, automatically logs in and starts a graphical user interface.

If configured to boot to shell, log in with pi as the user name and raspberry as the password. Then, enter startx to enter a graphical environment where you are presented with a desktop-type menu-driven operating system.

If you need to get back to text land, you can either

Remember, shutdown with the menu item or enter sudo shutdown -h now from a shell, and wait for the system to halt before removing power.

Using the Serial Terminal without a Monitor

Connect the FTDI to the mini-usb cable and plug into a usb port on your computer.

Set the serial settings to 72000 baud, 8 bit, no parity, 1 stop and no flow control. This is an odd rate that is 1.6 times slower than before. Also, CPU frequency effects the symbol rate so be careful if using this interface, and plan for administering by a different method.

A good way to operate a Pi is to attach it to the local network somewhere, then manage it from another computer connected to that same network.

Note: This method relies on a local Internet connection. Work through the configuration process with the monitor/mouse/keyboard or serial terminal (described below), then come back here.

To do this, download PuTTY or a similar SSH terminal for your system and connect to the Internet port used by the pi. The TTY interface gives you a serial-like interface but with colors that make it a little nicer to use. 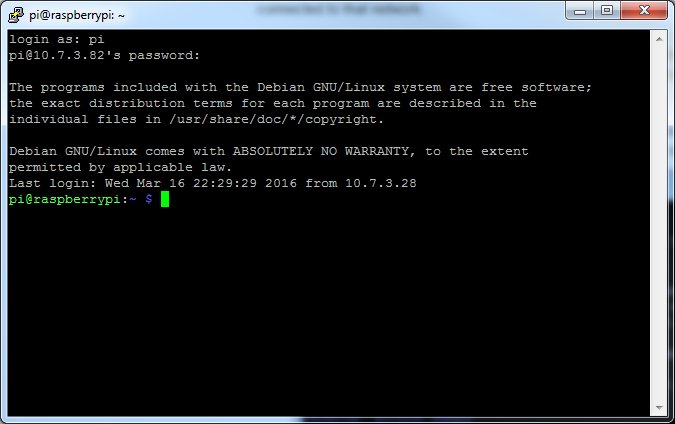 To obtain your IP address, get to a terminal, and use the command ifconfig . Alternately, hover the mouse pointer over the network icon on the task bar.

If it looks similar but the IP addresses aren’t present, that network link hasn’t been established.

In this example, we know our Ethernet is on IP 14.7.3.188 and our wireless on 32.8.0.142. These can be entered into the PuTTY configuration window to begin the session. From here, it just works like the serial link! 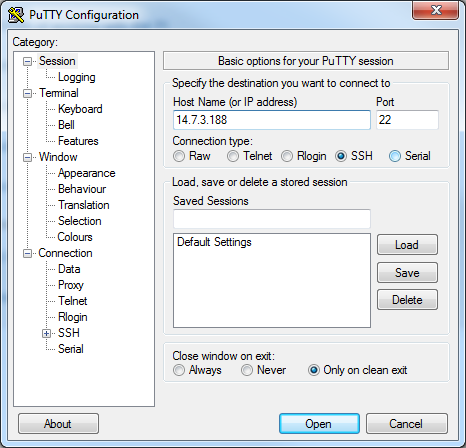 This section goes over configuring the keyboard, wired, and wireless internet.

The Raspbian distribution comes defaulted to European hardware. With US keyboards, the “ (quotation mark) symbol is replaced by @ (commercial at) and our number sign # is replaced by the European pound sign £. This can make it aggravating when trying to #define things. Invoke the config tool with “sudo raspi-config,” and take the following actions:

Set the default locale for the system

Change the keyboard layout – from the Internationalisation Options menu,

Finish with the dialog and get back to the shell

Try the “ and # keys at the prompt. It may be necessary to restart the pi at this point.

Raspbian does a good job of configuring wireless networks automatically. By default, DHCP is configured so that the Pi will receive an IP address when a network cable is plugged it to the Ethernet port or when a wireless network is connected.

To use the graphical network tool, right click on the icon on the right side of the task bar, and click “WiFi Networks (dhcpcdui) Settings”. Then, select the interface desired (wlan0 or eth0) to disable the DHCP and set your own IP, if necessary.

To connect to a wireless network, click on the icon, select the desired network, and enter the password.

Hovering over the icon will bring up a status of wlan0 and eth0 that also shows the IP address.