Quick, what’s the price of Bitcoin? Is it lower today than yesterday? Are you overdrafting your Lamborghini account? What if you had an easy way to tell at a glance how much you could have made if you sold in December of last year? That’s what this Bitcoin price tracking traffic light is all about, and it’s a great use of existing electronics.

The other ends of these wires are attached to a trio of pins on a Raspberry Pi Zero W, giving this traffic light table lamp Linux and a connection to the Internet. 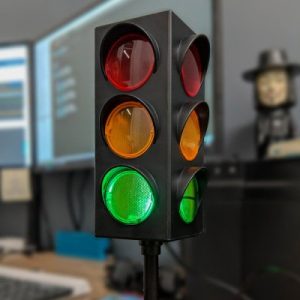 On the software side of things, we’re looking at a Docker container running a Python script that fetches the latest Bitcoin price from Coindesk and calculates the change from the previous fetch of the price of Bitcoin. This data is shuffled off to another Python script that actually changes the LEDs on the lamp.

Sure, these days a ‘bitcoin price tracking traffic light’ is as simple as connecting a red LED to a battery, and if you’re feeling extra fancy you can add a 220 Ω resistor. But this is a project that’s so well executed that we’ve got to give it a tip ‘o our hat.