Set up your Pi to automatically take care of a house plant by reading a moisture sensor and watering when needed. 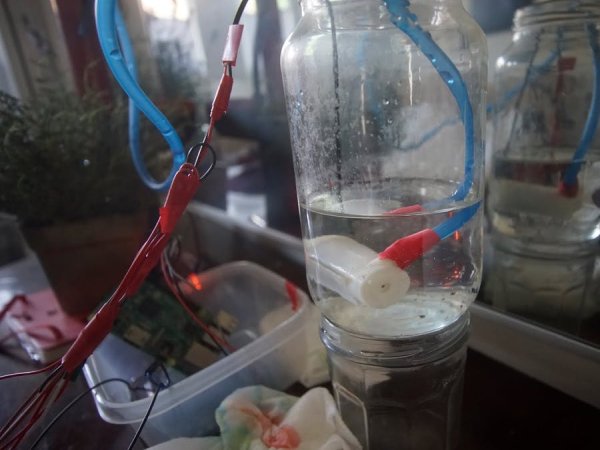 After reading about how well things can grow indoors, I started thinking that maybe automation was my path to healthy plants. So I decided to build the bare minimum – get a plant, a pump, and a water sensor. When the water sensor says “no water here”, use the pump to put water there.

I also decided to run it all through a Raspberry Pi to as an excuse to interact with the RPi GPIO.

Here’s how I did it!

The first thing I did was make my 5V power supply from a usb cable. Using an old iphone cable, I cut the iphone side off and fished out a red and black wire. I soldered some sturdier wires to this, and plugged it into a wall adapter. Checking with a voltmeter, this gave me 5V output. 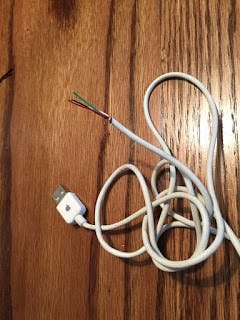 Now time for the GPIO.

Water Sensor – plug the positive lead from the water sensor to pin 2, and the negative lead to pin 6. Plug the signal wire (yellow) to pin 8.

Relay – Plug the positive lead from pin 7 to IN1 on the Relay Board. Also connect Pin 2 to VCC, and Pin 5 to GND on the Relay board.

Pump – Connect your pump to a power source, run the black ground wire between slots B and C of relay module 1 (when the RPi sends a LOW signal of 0v to pin 1, this will close the circuit turning on the pump).

This diagram should capture the correct GPIO so long as you are using Raspberry Pi 3. Not shown is another power source to the RPi.

Once the wiring has been completed, attach the flexible hose to the pump (I used electrical tape), and drop it into a jar of water. Attach the other end of the hose to your plant.

Now plug in all power sources (and make sure your Raspberry Pi is running some version of an operating system, like this one here). 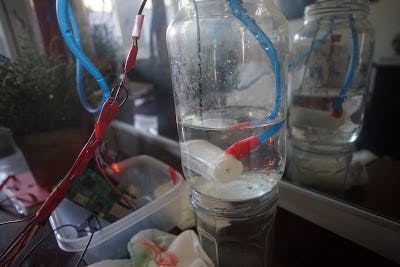 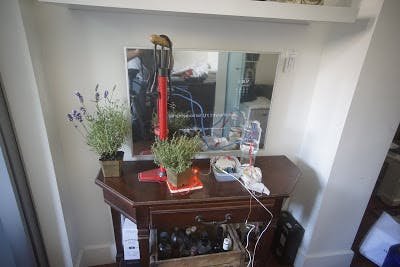 Note: If you get the wiring exactly as described above, my code in the next section will work with no modifications. There are two parts to this setup. One file controls all the GPIO and circuit logic, and the other runs a local web server.

Let’s start with the code for controlling the GPIO. This requires the RPi.GPIO python library which can be installed on your Raspberry Pi as follows:

With that installed, you should be able to use the water.py script found here.You can test this is working correctly by running an interactive python session as follows:

$> python3.4 >>> import water >>> water.get_status() >>> water.pump_on() This should print a statement about whether your sensor is wet or dry (get_status()), and also turn on the pump for 1s. If these work as expected, you’re in good shape.

At this point you can also calibrate your water sensor. If your plant status is incorrect, try turning the small screw (potentiometer) on the sensor while it is in moist soil until the 2nd light comes on.

The next aspect of this project is to setup the web server. This code can be found here in a file called web_plants.py. This python script runs a web server enabling various actions from the script described above.

You will need to keep web_plants.py in the same directory as water.py and auto_water.py described above. You will also need a subdirectory called “templates” containing the html file here called main.html.

You will need to install flask, and psutil as follows:

Make sure to place the web_plants.py file in the same directory as the water.py script above. You will also need to create a sub-directory called templates, and place main.html in the templates directory. Now run the following command command to start your web server:

$> sudo python3.4 web_plants.py Now if you navigate to the ip address of your RPi, you should see a web dashboard something like this: 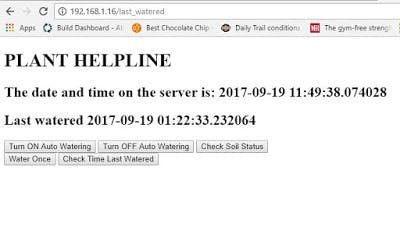 Try clicking the buttons to make sure everything works as expected! If so, you’re off to the races. here’s another great tutorial I followed on flask + GPIO

Finally, you probably want the website to auto start when the RPi gets turned on. This can be done using a tool called cronjob, which registers your website as a startup command.

This will bring up a text editor. Add a single line that reads (and make sure to leave one empty line below):

Now when you reboot your pi, it should auto start the server.

C++ REVERBS FROM A MATLAB DESIGN

The guitar ‘Toing’ sound from the ’70s was epic, and for the first time listener it was enough to get...