Brainboxes announced its BB-400 NeuronEdge Controller last July equipped with a Raspberry Pi Compute Module 3 (CM3), and has now begun shipping it with the faster Raspberry Pi Compute Module 3+ announced in January. The industrial controller, which competes with other RPi based controllers like Techbase’s CM3-based ModBerry 500 M3 and Janz Tec’s RPi 3-based emPC-A/RPI3, has also added an Arduino MCU for “edge processing.” 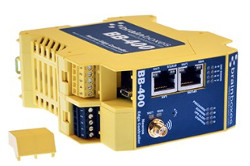 Designed “to sense, sort and send machine data,” the BB-400 ships with an open source Raspbian Lite stack with secure web administration, as well as sample applications for C#, .NET Core, Python, Node-RED, and Node.JS., Docker containers are available with a web admin interface, and there are also customized containers for Node-RED visual programming. Cloud connectivity is “coming soon.”

The Raspberry Pi CM3+ offers the same quad-core, Cortex-A53 Broadcom BCM2837B0 SoC as the RPI 3B+, but due to the lack of a PMIC, you’re still limited to 1.2GHz. The biggest improvement is that there are expanded eMMC options, including the 32GB configuration used on the BB-400. There’s also a -20 to 70° operating range, which Brainboxes has extended to -25 to 80°C.

The CM3+ provides the BB-400 with 1GB LPDDR2 RAM and 32GB eMMC. The otherwise extensive documentation offers no details on the Arduino compatible microcontroller, which provides “access to the vast library of Arduino I/O functionality.” The Arduino chip controls the system’s 8x digital inputs and 8x digital outputs with protocol support including REST, WebSockets, ASCII TCP, Unix Domain Socket, and “ASCII over local Com Port.” An RS232/422/485 serial port is available via a terminal block connector. 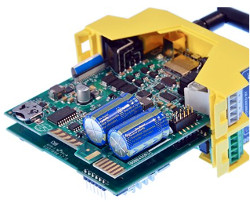 The BB-400 communicates via 802.11 b/g/n and Bluetooth 4.0 with a detachable antenna, as well as dual, independent 10/100 Ethernet ports: one for the uplink to the cloud and the other to hook up industrial gear. Both Ethernet ports offer 1400V magnetic isolation. There’s also an NFC chip, which will be supported soon via a software update.
The BB-400 features dual 5-30V redundant DC inputs with reverse polarity protection that support up to 35V. There’s also a mini-UPS with a typical 40-second shutdown window. The 120 x 99 x 45mm system typically runs on 4W, with maximum consumption at 15W, and offers built-in DIN-rail mounting.

The BB-400 NeuronEdge Controller is available now for $538.65. More information may be found in Brainboxes’ BB-400 release announcement and product/shopping page.

WANDEL WEAPONIZES WASTE WITH LEGO AND A RASPBERRY PI

Before 3D printers, there was LEGO. And the little bricks are still useful for putting something together on the quick....