The “Monarco HAT” industrial interface for the Raspberry Pi offers analog, digital, RS-485, and 1-wire I/O, plus a power supply, watchdog, and RTC.

Czech-based REX Controls has passed the halfway mark on its Indiegogo funding journey for a 99-Euro ($126) Monarco HAT industrial interface add-on for the Raspberry Pi, with 20 days days left. Shipments are due in September.

The Monarco HAT combines an industrial interface add-on designed to the Raspberry Pi Foundation’s HAT (Hardware Attached on Top) I/O specifications, along with in a 10-30 VDC power supply that can also power your Pi. A stretch goal calls for an aluminum enclosure option with a DIN rail kit.
Monarco HAT installed on an a Raspberry Pi (left), and with the addition of its detachable push-in terminal connector
(click image to enlarge) 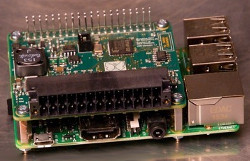 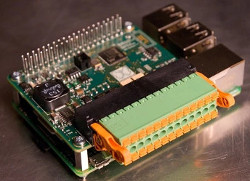 Monarco HAT installed on an a Raspberry Pi (left), and with the addition of its detachable push-in terminal connector
(click image to enlarge)
The Monarco HAT supports tasks including reading and archiving sensor data, monitoring machines, and acting as a communication gateway between devices. It can also provide feedback control in non-critical applications, says REX Controls 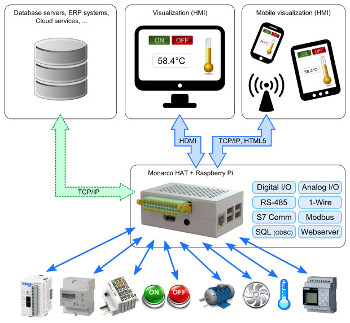 The device is optimized for use with the commercial REX Control System for the Raspberry Pi software, which is available on Pi-based industrial add-ons like the Cube-Controls Pi Cubes home automation and HVAC kit. This GUI programming environment offers access to a function block library with timers, comparators, filters, and PID controllers. It’s not required, however, and REX Controls also offers open source libraries for C and Node.js, and full documentation to support Python, C#, and other frameworks and languages. 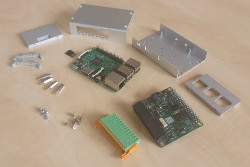 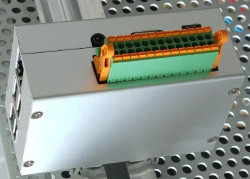 The Monarco HAT can interface with gizmos including 1-Wire devices such as sensors and relay boards, RS-485 devices and PLCs supporting the Modbus RTU protocol, and any PLC connected via digital or analog I/O. It supports a wide variety of sensors with 0-10 V or 0/4-20 mA output, as well as servo drives with pulse/dir inputs. Other supported devices include frequency inverters, heat pumps, chillers, and other 0-10 V input devices. It can also control push buttons, switches, flow and utility meters, and more.

The HAT can also work in conjunction with PLCs, servers, cloud services, and Modbus TCP devices accessed via the Raspberry Pi’s Ethernet port. The device is compatible with the Raspberry Pi A+, B+, 2, and 3, as well as the official Raspberry Pi 7-inch touchscreen

Specifications listed for the Monarco HAT include:

The Monarco HAT is available on Indiegogo in packages starting at 99 Euros ($126), with shipments expected in September. Volume discounts are available. More information may be found at the Monarco HAT Indiegogo page and REX Controls website.

In the last ten years, the technology for manufacturing lightweight, flexible PCBs has made huge progress. Lightweight flex circuits are...