The third revision of the Raspberry Pi can best be summed up by the old adage of more of the same. A faster processor and Power over Ethernet capability were advertised – OEMsecrets tells you what you need to know. 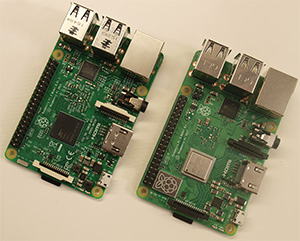 Raspberry Pi’s are always sold via the ecosystem. This is a promise which the foundation, by and large, manages to keep: if you use a sufficiently recent version of RaspBian so that the new SOC is supported, the same memory card can also be used in older versions of the process computer. When looking at the thing from the top, not many differences can be seen. The most important change is the addition of the four pin header for the Power over Ethernet hat: it might cause problems with some cases. Other than that, the physical dimensions remain the same.

One interesting aspect is the heat spreader above the SoC. Eben Upton’s engineers used this opportunity to redesign the PCBs stack, thereby improving heat dissipation into the ground plane. This has two effects: first of all, the nominal maximum frequency has now increased to 1400 MHz from 1200 MHz. An important side effect is the ability of the process computer to sustain performance for longer runs – this can be shown in the figure which plots the temperature against the time when the process computer’s SoC is under heavy load.

The actual increase in processing power is rather modest. A short run of SysBench reveals the following results – the amount of RAM was not increased from the predecessor:

The Raspberry Pi foundation, of course, stays true to the MicroUSB port used for power supply. Some pundits claim that the plug is over strained – recently, MicroUSB plugs capable of carrying 3A have been provided by companies such as Wurth’s WR-Com series.

As for the actual power consumption, it increased a small bit. Our table contains some values which were obtained from a HP 6624A system power supply.

Read more: The third revision of the Raspberry Pi can best be summed up by the old adage of more of the same.

Light Up the Room With These LED Earrings

Before attending a fancy event, my friend asked me to create her some earrings that would light up. I needed...