We built a biometric fingerprint-controlled lock prototype. A fingerprint scanner is used to capture and store the fingerprints of authorized users. When the scanner recognizes a user, a solenoid plunger disengages and opens the lock.The fingerprint scanner module is powered by an ARM Cortex M3 CPU, which controls the on-board optical sensor and fingerprint recognition. Fingerprints are stored and processed by the module, which supports a UART protocol for communicating with a host application. The solenoid is powered from Kinoma Create and controlled by a digital output pin.

Both front pin headers are configured for +5V and pin 51 is configured as a digital output. The application programmatically configures the front pins and displays the Pins Settings dialog.The solenoid used to lock and unlock the door requires two additional bits of electronics: a transistor and a flyback diode. The transistor acts as a switch for the 5v power supply from Kinoma Create, allowing us to turn on and off that current to the solenoid using our 3.3v digital out pin. The diode helps to protect Kinoma Create from electrical surges generated by the solenoid, dissipating flyback energy as heat through the solenoid rather than as a power spike into the Kinoma Create’s digital output pin. 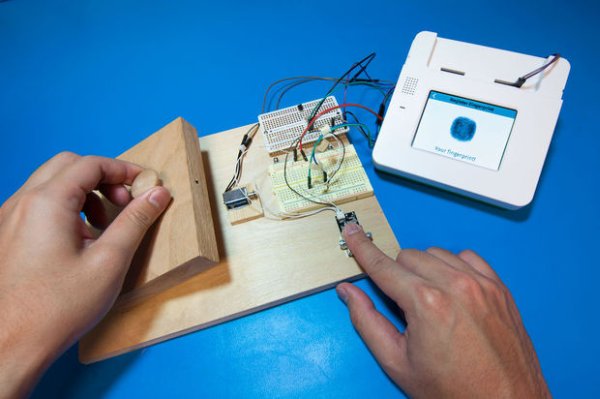 The KinomaJS application opens to a screen that displays a list of registered fingerprints. Three buttons are provided at the bottom of the screen to interact with the scanner.

For more detail: Unlock a Door with your Fingerprint