Li-ion cells become more and more popular due to their capacity and reasonable prices. In this entry I will show how to build a simple li-ion battery charger based on MCP73831 chip. It’s a quite useful device for DYI projects,in addition its cost is only around 1,5 euro. 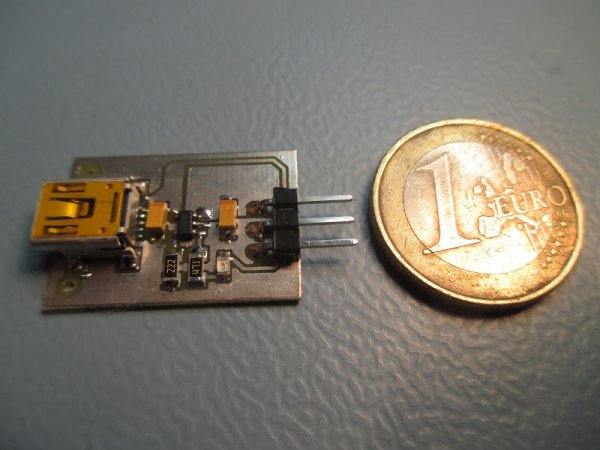 The device uses USB port as a power supply (mini-USB connector). I use the standard gold-pins as an output socket. There’re three of them, but only two are used (looking on the image, counting from top: V+, V-). I will design my li-ion based devices in the same way (same socket, but female), then if I will connect it in the incorrect direction (rotated 180 degrees) they won’t be damaged (V- connected to V-, but V+ connected to n/c pin) – simple way to avoid plugging in an incorrect way.

LED indicates if battery charging is in progress.

Pay attention to connection polarity, li-ion batteries can burn or explode if connected incorrectly. Never leave battery unattended while charging is in progress.

The PCB could be smaller, but it’s made in this shape according to chip’s documentation, additional copper space is used to dispatch heat produced during charging. The documentation mentioned 2-side layout, but I used only one side. The copper was coated by using Lichtenberg’s alloy, so heat dispersion is improved – it seems that it’s enough.

That’s all, I will use this tool while upgrading my Evaluation board for DYI robots and . I will also have to thing about some DC/DC converter for them (to obtain 5V from li-ion battery), but that’s a different story.