Taking an old piece of gear and cramming it full of modern hardware is a very popular project. In fact, it’s one of the most common things we see here at Hackaday, especially in the Raspberry Pi era. The appeal is obvious: somebody has already done the hard work of designing and building an attractive enclosure, all you need to do is shoehorn your own gear into it. That being said, we know some of our beloved readers get upset when a vintage piece of gear gets sacrificed in the name of progress.

Thankfully, you can put your pitchforks down for this one. The vintage radio [Freshanator] cannibalized to build this Bluetooth speaker is actually a replica made to invoke the classic “cathedral” look. Granted it may still have been older than most of the people reading this right now, but at least it wasn’t actually from the 1930’s.

To start the process, [Freshanator] created a 3D model of the inside of the radio so all the components could be laid out virtually before anything was cut or fabricated. This included the design for the speaker box, which was ultimately 3D printed and then coated with a spray-on “liquid rubber” to seal it up. The upfront effort and time to design like this might be high, but it’s an excellent way to help ensure you don’t run into some roadblock halfway through the build.

Driving the speakers is a TPA3116-based amplifier board with integrated Bluetooth receiver, which has all of its buttons broken out to the front for easy access. [Freshanator] even went the extra mile and designed some labels for the front panel buttons to be made on a vinyl cutter. Unfortunately the cutter lacked the precision to make them small enough to actually go on the buttons, so they ended up getting placed above or next to them as space allowed.

The build was wrapped up with a fan installed at the peak of the front speaker grille to keep things cool. Oh, and there are lights. Because there’s always lights. In this case, some blue LEDs and strategically placed EL wire give the whole build an otherworldly glow. 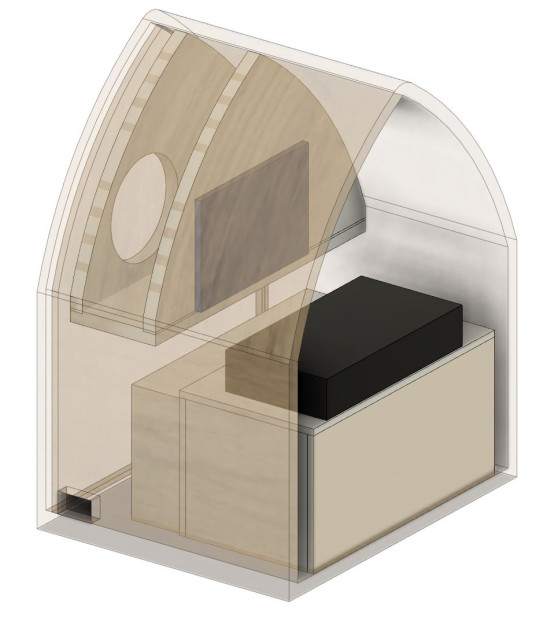 If you’re interested in a having a frustrating quasi-conversation with your vintage looking audio equipment, you could always cram an Echo Dot in there instead. Though if you go that route, you can just 3D print a classic styled enclosure without incurring the wrath of the purists.

Beret is an educational project to program the Rainbow HAT on Android Things using a visual language built on Blockly....