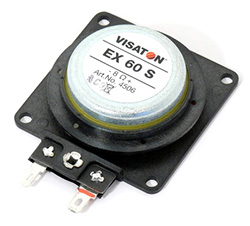 Fans of HiFi sound and similar „audiophils“ usually don´t cover their loudspakers and surely not their membranes. Firstly, to cover a beautiful top-class loudspeaker is almost a sin 🙂 and naturally all that stands in a way of sound usually influences it in a negative way.
However, totally different situation is in traffic, audio bells, industrial conditions, in various kiosks (POS) and other applications. Here a loudspeaker is usually mounted behind various covers so as to be protected from mechanical damage. For these applications we can use various industrial loudspeakers which are available in dust- and water-proof versions.

If we go even further, applications where even a perforated loudspeaker cover is undesirable – weather from aesthetical or a technical point of view. For these purposes German company Visaton offers elegant solution – “Exciter”. Visaton Exciter is in fact a loudspeaker without a membrane optimized to be mounted on a flat panel, where by a mechanical connection with a given surface a final “loudspeaker” arises.

How does it function?
Do you remember the physics from a primary school and something about Newton´s law of action and reaction? This is exactly the same principle. Electromagnetic field in loudspeker´s coil acts by a force on a front plate of the Exciter and also on a rear part of the loudspeaker (the magnet). As a rear part with a magnet is much heavier than the front plastic one, the loudspeaker has sufficient “reserve” to efficiently wobble a given panel (on which it is mounted). This way a panel becomes a membrane.
To reach the highest possible efficiency, it´s desirable to mount the Exciter on the panel which is relatively thin and lightweight. An extreme example it might be to mount the Exciter on (infinitely) rigid panel and then a rear part with magnet would oscillate, i.e. the sound would be produced only backwards – behind the panel. It´s easy to imagine, that resulting properties of a sound generated by Exciter are strongly dependent on a panel on which it is mounted. That´s why a frequency response can´t be found in the datasheet. As for mounting – it can be done by screws or by glueing.

Manual switching of outdoor lights in houses or roadways can be sometimes really inconvenient especially when we are far away...