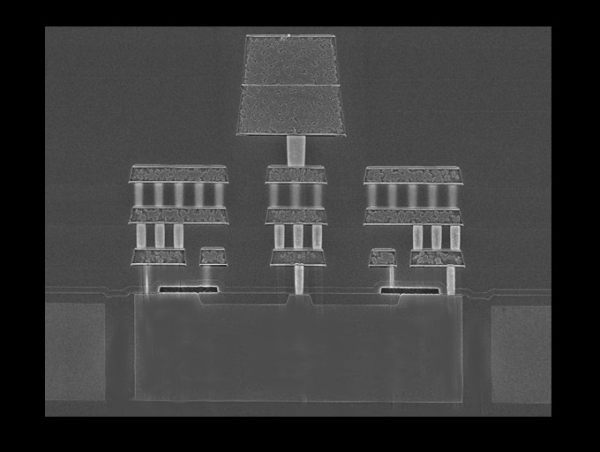 Covering voltages of 70V to 125V, these complementary NMOS/PMOS devices are based on the company’s XT018 BCD-on-SOI (https://www.xfab.com/en/technology/soi/018-um-xt018/) platform with deep trench isolation (DTI) and support for automotive AEC-Q100 Grade 0 products. They deliver competitive on-resistance (Rdson) figures, while still providing robust safe-operating areas for Rdson, Idsat and Vth. A highly effective ESD protection mechanism has been incorporated to ensure long-term operational reliability. In addition, high-voltage N-channel depletion transistors based on the new voltage classes are also available. These will enable simple, area efficient start-up circuitry and voltage regulator implementations to be realized.

48V subsystems are being increasingly adopted by the world’s leading automakers as a means to improve fuel efficiency and reduce CO2 emissions. Mild hybrid cars are the first to utilize 48V-rated components, which will initially focus on a number of core elements, like starter/generators, DC-DC converters and battery management subsystems, as well as other high-current functions, such as water pumps and cooling fans.

At the same time, the fast growing Li-Ion battery markets for electric vehicles and energy storage is moving to taller battery cell stacks which require higher voltages. The XT018 BCD-on-SOI platform now provides an even more flexible voltage offering up to 200V to support the increasing number battery cells that need to be monitored by a single BMS IC.

BCD-on-SOI is superior in many aspects when compared to conventional bulk BCD technologies, making it attractive to designers. Key advantages include virtual latch-up free circuits, strong EMC performance (due to complete isolation with buried oxide/DTI) and simplified handling of below ground transients. Furthermore, through the potential for significant die size reduction along with first-time-right implementation, development periods can be accelerated and lower costs per die can be achieved.

Interfacing Raspberry Pi with Arduino UNO Raspberry Pi is great tool for embedded engineers but it lacks ADC. One more...