In this modern world crime has become ultra modern too! In this current time a lot of incident occurs like robbery, stealing unwanted entrance happens abruptly. So the security does matters in this daily life. People always remain busy in their day to day work also wants to ensure their safety of their beloved things. Sometimes they forget to look after their necessary things like keys, wallet, credit cards etc. Without these, they are unable to access their home or any place they want. To prevent such incidents many scholars came into action and tried to pro- hibit them. Like YanboZhao ; ZhaohuiYe introduced “A GSM/GPRS based wireless home security system[2] but the system is not cost effective as the GSM/GPRS charges a fixed amount from each sms/call or data transfer. Ha- san,H. ; Bakar,R.A. ; Mokhtar,A.T.F. also introduced ” “Face recognition based on auto-switching magnetic door lock system using microcontroller”[3][5] but face recognition means com- plex algorithms and sometimes the system may be unable to detect the visitors identification correctly and keeps a computer chip busy for longer time. Assaf, M.H. ; Mootoo, R. ; Das, S.R. ; Petriu, E.M. ; Groza, V. ;Biswas, S. invented “Sensor based home automation and security system”[4] designed a sensor based system. Lots of paper work has been done so far. In this paper, a new system is designed which would control the door through the internet without any complexity. It’s very conve- nient and serves as a plug and play system. The user can see from anywhere in this world that who is at his door steps. The system keeps a picture of the visitor as evidence that would be needed if any unwanted situation occurs like stealing, robbery etc. The user can control the door with a single command through the internet by mobile, pc, tablets etc. This system can also be used for industrial automation wirelessly. Also for any kind of accident like fire, or stolen keys the door can be opened by a single and simple command. As a result the security is con-
firmed also the mental peace. In this project with a minicomputer raspberry pi different input and output is interfaced. In input section there is calling bell, PIR sensor & wireless camera. In processing section a minicomputer raspberry pi is used. Raspberry pi is equipped with wifi dongle. And on the output terminal there are Lcd, magnetic door lock, emailing & tweeting services. A calling bell is placed on door so that if someone visits the user the person will press the bell and the bell will generate a signal to raspberry pi indicating presence of a person. There is also another way of sensing human and that is passive infra red human motion detection sensor. If any thief tries to break into the house PIR sensor will identify the motion of that human and will transmit an alarm to raspberry pi. Most im- portant input device is the wireless camera. It is used to see video stream and also whenever a person comes it takes a snapshot of that person and transmit it to raspberry pi. Raspberry pi process these inputs like whenever it gets a calling bell as input it trans- mits a signal to wireless camera to capture an image of the visitor. Within the time it receives the picture it generate a Tweet alerting the user that someone has arrived infront of door. After receiving the image raspberry pi sends a mail to user attaching the picture. User can control the magnetic lock through twiter. If user wants to permit the visitor access he can turn on the lock and if he wants to reject access for any reason user can show the reason to LCD tweeting a text for visitor

Raspberry Pi Model B has 512Mb RAM, 2 USB ports and an Ethernet port. It has a Broadcom BCM2835 system on a chip which includes an ARM1176JZF-S
700 MHz processor, Video Core IV GPU, and an SD card. It has a fast 3D core accessed using the supplied OpenGL ES2.0 and Open VG libraries. The chip spe- cifically provides HDMI and there is no VGA sup- port. The foundation provides Debian and Arch Li- nux ARM distributions and also Python as the main programming language, with the support for BBC BASIC, C and Perl

The key of this project is Human sensing technology. In this projectPassive Infra Red sensor has been used to detect hu- man. Infrared radiation exists in the electromagnetic spectrum at a wavelength which is longer than visible light. it can be detected though it cannot be seen. Objects that generate heat also generate infrared radiation and those objects include an- imals and the human body whose radiation is strongest at a wavelength of 9.4um [6].PIR sensor is able to detect the change of radiation of these infrared radiation. A picture of working principle of PIR sensor is given below

PIR sensor generates +5v and -5v sine signal when any human or animal passes in front of the sensor or any movement is detected of human or animal in front of this. A breakout board is used to detect this signal and convert it into a longer digital signal. The output of PIR sensor can be adjusted. For max it can create an output signal for approximately 1.2 seconds [7]. This is more than enough to detect the signal. 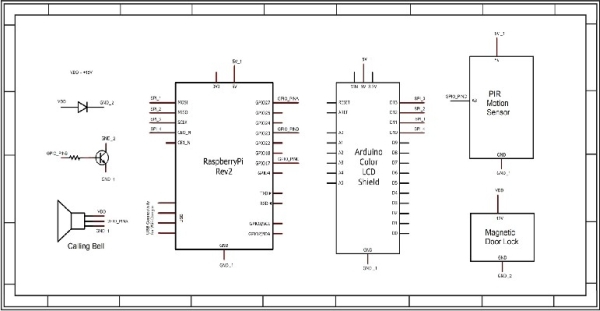 Heart of this project is raspberry pi minicomputer. Wifi dongle is connected through USB port. The wifi module scans for the available network and connects to the network with pass- word. Calling bell is connected with GPIO of raspberry pi. Whenever someone come to home and press button the calling bell starts to transmit musics. A resister is connected to calling bell and whenever music plays it generates 5v signal. This causes an interrupt to raspberry pi. PIR sensor is also con- nected to GPIO. The pin is pulled down and pir sensor also generates a high voltage whenever it detects presence of any human. Raspberry pi is always scanning for pir sensor input or calling bell input. Here is also an indication which gene- rates an special alert. In the algorithm it is defined that if any visitor comes in and press the bell means both the interrupt

happened it is a common situation and indicating that a visitor
has arrived But if only one interruption happens like human motion then it’s indicates that a thief or robber might have come. An individual interrupt of calling bell indicates pir sen- sor has gone out of order. When the system received both the interrupts raspberry pi take a snap shot of the person through wifi camera. Here the camera is connected with raspberry pi through wifi network. Raspberry pi transmits the snapshot through gmail. And also generates a tweet that someone has arrived. But if only PIR sensor generates the interrupt then it generates an instant alerm that might have someone is trying to have unauthorized access or break into the house. It takes several snapshots and generates several tweets to the user as alert. The 1.8’ TFT LCD is connected through serial peripheral interface and the magnetic lock is controlled by a GPIO.

For more detail: Access Control of Door and Home Security by Raspberry Pi Through Internet

This note introduces my experiences of using the Raspberry Pi to automate a model railway. Two aspects are covered: •Sending...