The main processor of the Pi and C.H.I.P. are fairly evenly matched, both operate at 1GHz with 512MB or RAM, but the C.H.I.P. uses the newer ARMv7 architecture (the Pi Zero uses an older ARMv6 architecture, which is confusingly also called ARM11). They each are powered using USB, but C.H.I.P. can also be powered using a Lithium Polymer battery and has built-in charging circuitry. Pi Zero requires a microSD card to act as storage space for an operating system and applications; the slot allows for swappable software and memory expansion at the same size. C.H.I.P. has onboard 4GB of NAND flash storage, and ships with an operating system preloaded in the memory. To go bigger, you have to use USB (a faster interface than the SD card) and an external drive or storage device.Pi Zero provides an unpopulated 40-pin connector for input and output (I/O). Whereas C.H.I.P. offers two rows of 40-pin female headers — 80 total I/O — for easily accessible I/O. HDMI mini provides video output on the Pi, and composite video output is possible, but requires aftermarket soldering. C.H.I.P. lacks HDMI — though an HDMI accessory board is available — but has composite video output through the TRRS jack (it looks like a headphones jack). 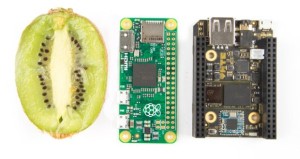 The debate is also about differing approaches to product design. Is it better to take an existing product and remove components to make it cheaper, or is it better to simply setup and build a cheap product with all the features you want?

On one side, the Pi Foundation has taken an existing design and removed components from it to make it cheaper. The Pi Zero is a smaller board with less connectors. The CPU is faster by 300MHz than the Raspberry Pi B+, but that is thanks to a software configuration setting, which could be done on the B+ too.

Next Thing Co., on the other hand, only has one computer in their product lineup. C.H.I.P. is inexpensive because NTC has leveraged economies of scale and developed close business relationships with suppliers and manufacturer in Shenzhen, China.

This is how we got here. Six months ago Next Thing Co. launched their $9 computer on Kickstarter, generating over $2 million in pledges. The board is now shipping to crowdfunding backers; they’ll begin taking proper preorders on Cyber Monday.

Meanwhile, on Thursday the Raspberry Pi Foundation announced and began to sell the $5 Pi Zero, and included the board in copies of their MagPi print magazine. It was immediately available, but sold out on all reseller sites by the next day.

This promises to be great fun! I'm going to be combining two of my favorite things: Kali GNU/Linux software and...