Device enumerates as composite device: sound card + HID input. HID input part is used for audio volume and mute control and it functionality is slightly broken – same as with multimedia keyboard it controls default sound card settings, not necessary settings for this specific device.
USB descriptor dump:
Judging by the descriptors chip inside is identical as in previously described “C-Media” sound card version without any control keys.

Unlike the previous “C-Media” USB sound card I’ve tested and similar card from this thread it was easy to find point where DC signal component is not blocked:audio input is mono and two “live” contacts of mic jack are physically shorted together; DLL is intented to be generic (handle stereo cards also), but 2nd channel can be disabled (i.e. hidden) in GUI: 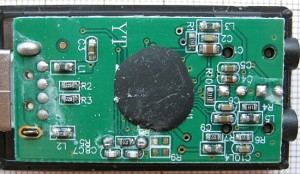 In this experiment I will use an Arduino and a DCF77 time signal radio receiver to measure the stability of an ovenized...