A self-taught programmer has combined a Raspberry Pi Zero with a Pocket Etch-A-Sketch to create a camera which, instead of prints, produces mini Etch-A-Sketches of what the camera ‘sees’.

Etch-A-Sketch – one of the most annoying, but weirdly satisfying toys, of years gone by – is back in the headlines as a self-taught programmer on YouTube has combined one with a Rasberry Pi Zero to create an ‘Etch-A-Snap’.

As the name suggests, the Etch-A-Snap is a camera that produces a sketch, on the mini Etch-A-Sketch, rather than printing a photo out.

It snaps photos just like any other camera, but outputs them by drawing to a Pocket Etch-A-Sketch screen,” says Martin Fitzpatrick.

Now, you might be wondering why you’d want to build one but if you do want to have a go, Martin has shared a number of photos on Two Bit Arcade as well as a full list of what you’ll need to make an Etch-A-Snap. 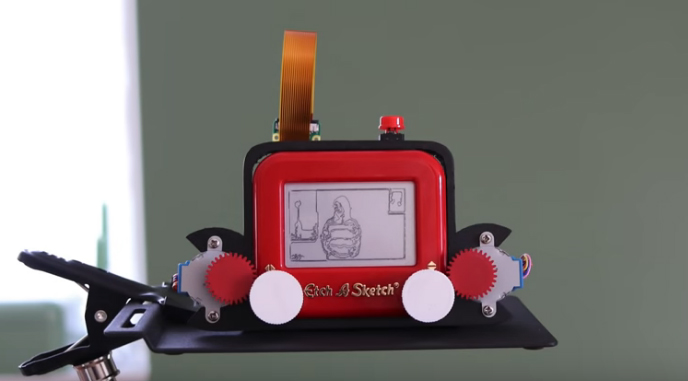 Photos are processed down to 240×144 pixel 1-bit (black & white) line drawings which are then translated into plotter commands. The device then, rather slowly (15mins-1hr), draws out what the camera captured onto the Etch-A-Sketch screen.

The Etch-A-Sketch wheels are driven by two 5V stepper motors mounted into a custom 3D printed frame and the Etch-A-Snap is powered by 4xAA batteries/3×18650 LiPo cells.

If you want to try a slightly simpler DIY project, why not have a go at these?