Most of the new sensors are related to exhaust aftertreatment because of new emissions laws with NOx reduction a focus alongside that of carbon dioxide.

As a pollutant, NOx has long been a stronger focus for US legislation, which also dictates that the emission parameters are measured under realistic driving cycle conditions.

But European legislators have also become tougher on this gas in recent years. IHS forecasts that the market for NOx sensors will grow at a CAGR of 9.3% during the next five years from 2014 to 2019. 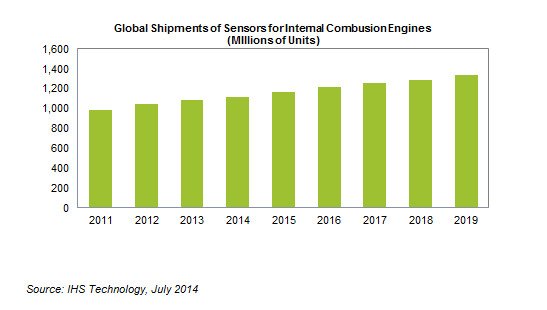 The global market for sensors used in internal combustion engines (ICE) is on the road of steady growth for the next few years, propelled by increasing utilisation in engine management and exhaust after-treatment.

“Shipments of ICE sensors are growing slightly faster than car shipments,” says IHS’ Richard Dixon, “the main reason is that new concepts in emissions mitigation in the engine and in exhaust after-treatment systems require advanced sensors for their operation. Added to that, emission legislation in some major markets of the world, like China, is beginning to catch up with that of mature markets like the U.S., Europe and Japan, at least in the larger cities.”

IHS examines more than 20 sensors attached to the engine, fuel and exhaust systems of passenger vehicles. The list includes pressure sensors, devices to monitor flow and temperature, ceramic sensors for the gases nitrogen oxide (NOx) and oxygen, in addition to knock sensing, position and speed.

Among the 24 applications identified for sensors used in ICEs, several measurements have been essential to electronic fuel management systems for more than 20 years: the position of the throttle and crankshaft, the absolute air pressure of the intake manifold and the residual oxygen in the exhaust. And multiple sensor insertions are possible—depending on the pipe configuration, a gasoline engine can feature four oxygen sensors, two of which serve an on-board diagnostics function to check for correct operation, although a diesel engine still has only one oxygen sensor, located before the diesel oxygen catalyst.
The biggest category for sensing is temperature measurement, with multiple sensors to be found on exhaust systems. The technology used is typically platinum-based resistance temperature detector (RTD) sensors to withstand temperatures of up to 1,000 C (1,832 F). On average, approximately two temperature sensors are used per vehicle. At lower temperatures, negative-resistance sensors (NTC) or semiconductor integrated circuits are also deployed. Examples include engine-coolant monitoring to protect against overheating, intake air measurement or in exhaust-gas recirculation systems used to lower NOx output from the engine.

At other points in the powertrain, the fuel injection system and cylinder pressure are proving to be interesting new opportunities for pressure sensor suppliers. Although cylinder-pressure sensing has been largely too expensive for car manufacturers to adopt, IHS expects significant growth in this area in coming years, led by Volkswagen and Daimler in diesel engines. Owing to the low penetration today, growth rates in the coming five years to 2019 are high at more than a 40 percent CAGR.

READ  Raspberry PI with Windows 10 made realtime with a launchpad

Analog Sensors Reading with Raspberry Pi as Interface The Raspberry Pi has no built in analogue inputs which means it...